Interesting NDPR review of a new book, Phenomenology of Sociality: Discovering the 'We' edited by Thomas Szanto and Dermot Moran, HERE.  Looking over the review I was prompted to take an extended peek at this book, just for a few hours this morning, and it appears that those who are interested in phenomenology's utility for developing new concepts in speculative philosophy, particularly that domain's possible relationship to ethics (which is currently horribly underdeveloped), might enjoy it.

One thing that annoyed me however, if After Nature readers will permit my own short review of Phenomenology of Sociality, is that despite the talk of pulling ethics into the foreground of new theoretical frameworks involving phenomenologies of sociality - so we hear of not just a "lifeworld" but a "We-world," the need for an emphasis on other-subjects, features of a phenomenology of sociality including sharing and togetherness, and finally, challenges to Mit-sein ("Being-with") including the drawing of false analogies, experiences involving that which is "totally alien," and the perplexing Pontyean "being-within-each-other," it seems that all of this takes place from within a radically anthropocentric point of view.

Now, you may be saying that the book appears to be an explication of strictly methodical treatments of sociality, and so a division between human and non-human does not apply. However, it appears that the very categories employed by the authors, at times, do leave out the very possibility of non-humans being part of the equation. For example, linguistic analysis is at the center of the study of phenomenology of grief - all the while forgetting that non-linguistic expressions of grief, or even expressions of grief which occur in a language humans may not understand - may be foreign to a human being's usual understanding of that particular emotion (specifically I am thinking about the much-controversial subject of grief and elephants, for some do not believe that elephants can through a language meaningfully express grief let alone truly feel that emotion. I, personally, disagree. See my radio interview about animal emotions on ABC National Radio's "The Philosopher's Zone," mp3 file HERE.). The same applies with the chapter on love and affection. These are just two small examples but the criticism does apply, in my humble judgment, to the whole of the book.


On the other hand there is a bright side to Phenomenology of Sociality: Discovering the 'We' " which is that there is some extremely good discussion of an ontology of persons and the various dimensions of "personhood," especially in the discussion concerning shared emotions. I just wish that some of these analyses could have had more of a capacious scope in mind so that non-human persons could be included in the application of the concepts under discussion. Just something for the editors to think about.

Speaking of phenomenology and sociality, a corner of my research has always been not just the sociality of reason, page Hegel or Brandom, but also the sociality of feeling: sensa of the organic body which more universally put could be called cosmic community.  (Thus my old relationship to "catholic" meaning "universal" rears its head yet again.) To those ends I would like to explore "ontological regard" and "onto-empathy" as a priori categories of social relations, perhaps in the future if time allows. With this in mind After Nature readers may wish to consult my post "Reality as Social Process and Onto-empathy" HERE. 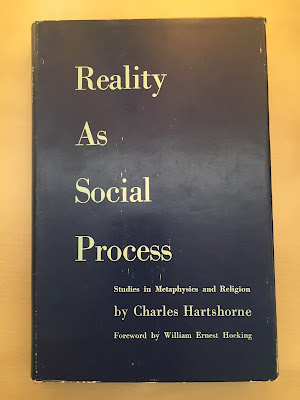 With respect to "catholicism" understood as universality - thus sociality of reason, civil religion, Hegel - the following After Nature posts might set a context as well with especial attention paid to how process-relational philosophers such as Alfred North Whitehead or Charles Hartshorne can, even in terms of their own theory, be appropriated by those of the Catholic faith who respect that form of philosophical universality (note: currently I am not in communion with the Church, having since several years ago left for Buddhism; e.g. for intense philosophical reasons but also for practical ones, i.e. my wife is Buddhist). But, with respect to those of the Catholic faith who might be interested in process-relational thought and its relationship to "catholic" universality, what I mean is that while often times, indeed if not most times, Whitehead and Hartshorne are picked up by liberal Protestant process theologians as models for theoretical advance, it is possible that from the Catholic perspective Whitehead and Hartshorne can be just as instructive .

In particular names and books that come to mind are Fr. James Felt (see his Coming to Be, a book that creates a Thomistic-Whiteheadian metaphysics of becoming), Fr. Frank Oppenheim (see especially his Thomistic-Process-Relational Reverence for the Relations of Life), Fr. Joseph A. Bracken (The One, the Many, and the Trinity traces the development of Roman Catholic theology as synthesized with process theology), Fr. Lewis Ford (a Thomistic re-construction of Whithead), Fr. Joseph Koterski (Aquinas and Whitehead in theoretical union), Fr. Norris Clarke (process-relational Catholic personalism), Fr. Hosinski (Stubborn Fact and Creative Advance - GREAT book) but also Daniel Dombrowski (aesthetics, beauty, process-Catholicism), John Haught (of Georgetown U, Catholic theology and evolution, nature, science, ecology), Fr. Walter Stokes (Whiteheadian-Thomistic realism). Kinast's Process Catholicism and Korsmeyer's God-Creature Revelation are also quite excellent. (In passing I should mention as well one significant historical text, Maritain's Bergsonian Philosophy and Thomism.) Here readers should keep in mind if wondering how I know all of this is that out of my roughly twelve year teaching career - or eight years teaching with the Ph.D. - I spent ten of those years teaching with Catholic institutions. Other than one VAP, Moravian College is the first non-Catholic institution for which I've taught.

With all of that said, the last point of this post is synthetic. More recently Bruno Latour has been drawn into the debate concerning "catholic" universality - but with respect to pluralism and its possible compatibility with process thought (cf. An Inquiry into Modes of Existence). This debate has made its way to the blogosphere, for better or worse, I want to say maybe...three years ago? In any case, two fundamental questions that arise with Latour, are; first, one may ask whether Latour's ontology is process-relational in perspective (I believe that it is); and second, is Latour's pluralism compatible with catholicism's universality - and not necessarily the Catholic church per se (again, I believe that it is for, again, "catholic" means universal). See posts below for commentary for how that might work and hopefully readers may find something interesting, entertaining, or of some use.

"More on Latour's natural religion and "speculative naturalism": on processes of pluralization" HERE

"Can Whitehead be a Christian philosopher? On the monarchical social organization of actual occasions" HERE