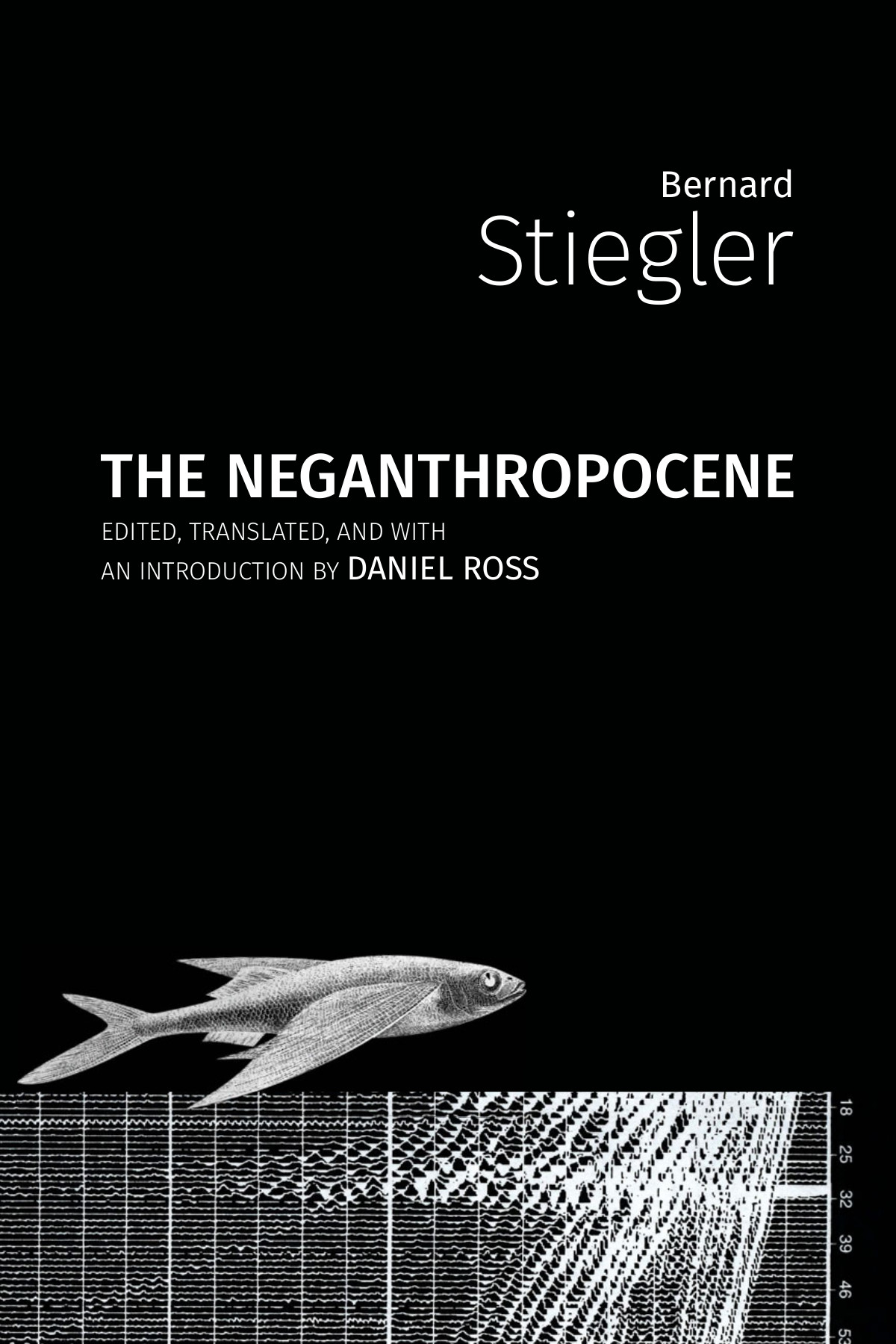 "As we drift past tipping points that put future biota at risk, while a post-truth regime institutes the denial of 'climate change' (as fake news), and as Silicon Valley assistants snatch decision and memory, and as gene-editing and a financially-engineered bifurcation advances over the rising hum of extinction events and the innumerable toxins and conceptual opiates that Anthropocene Talk fascinated itself with—in short, as 'the Anthropocene' discloses itself as a dead-end trap—Bernard Stiegler here produces the first counter-strike and moves beyond the entropic vortex and the mnemonically stripped Last Man socius feeding the vortex.

In the essays and lectures here titled Neganthropocene, Stiegler opens an entirely new front moving beyond the dead-end "banality" of the Anthropocene. Stiegler stakes out a battleplan to proceed beyond, indeed shrugging off, the fulfillment of nihilism that the era of climate chaos ushers in. Understood as the reinscription of philosophical, economic, anthropological and political concepts within a renewed thought of entropy and negentropy, Stiegler's 'Neganthropocene' pursues encounters with Alfred North Whitehead, Jacques Derrida, Gilbert Simondon, Peter Sloterdijk, Karl Marx, Benjamin Bratton, and others in its address of a wide array of contemporary technics: cinema, automation, neurotechnology, platform capitalism, digital governance and terrorism. This is a work that will need be digested by all critical laborers who have invoked the Anthropocene in bemused, snarky, or pedagogic terms, only to find themselves having gone for the click-bait of the term itself—since even those who do not risk definition in and by the greater entropy."

Interesting read for some perhaps. Langer was Whitehead's student and in her own right deserves more attention than has been paid to her in the history of philosophy.


I have long thought that Susanne Langer originated sthe term "virtual reality."  She did not, however there is reason to believe that she inspired the term since "virtual" this and virtual that appear throughout her Feeling and Form (1953).  Here is an account of the origin of the term from Science Focus:  The online home of BBC Focus Magazine  (author unknown)  "The History of Virtual Reality"    here

"In 1982, Thomas G Zimmerman would file a patent for such an optical flex sensor, and would go on to work with Dr Jaron Lanier – the man who coined the term 'virtual reality' – to add ultrasonic and magnetic hand position tracking technology to a glove. This led to what would become the Nintendo Power Glove sold alongside a small number – two – of NES games in 1987. "Virtual reality originally meant an extended version of virtual worlds," says Lanier, who these days is to be found working for Microsoft Research as well as writing books and music. "Ivan [Sutherland] had talked about the virtual world that you would see through a headset like that. He didn't make up that term; it actually comes from an art historian called Susanne Langer, who was using it as a way to think about modernist painting. To me, what virtual reality originally meant was moving beyond the headset experience to include some other elements, which would include your own body being present, so to have an avatar where you could pick up things, and also where there could be multiple people, where it could be social."

Langer, of course, was not an art historian but a philosopher of art.  Feeling and Form, which I will discuss in my next post, was a major work of mid-20th century aesthetics.   Also, Langer used "virtual" not just in relation to modernist painting but in relation to several arts including sculpture, architecture, and dance.
---- 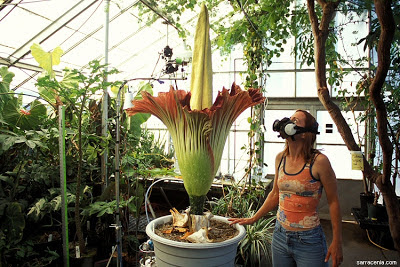 All papers, meals, wine, beer, coffee, and non-alcoholic drinks will be in the Founder’s Room of Mead Hall (Administration Building)

Registration Table Open all Day and Tomorrow by Desmond Coleman

4:10-5:20: Eco-Theology and Panpsychism
“A Study of Eco-Cosmological Theology from a Naturalist Perspective” – SooYoun Kim
“As so Many Sense-Organs of the Earth’s Soul: The Continuing Relevance of William James’s Reflections on Panpsychism “ – Jonathan Weidenbaum (Berkeley College)

“On the Participation of Nature in the Emergence of the Sacred: Bateson’s Ecology of Mind, Ecstatic Naturalism, and Environmental Ethics” – Sarah O’Brien (Drew University)
“Deep Pantheism: Nature Naturing and the Problem of Consciousness” -Thomas Millary

Refreshments: Dinner on your own


“The Mind and Nature in the Prophetic Tradition” – Ji Eun Park

FYI for those in Germany and surrounding, care of Merve Verlag.

Continental philosophy of religion (CPOR) has succeeded in many ways to question modern divides between philosophy and theology, thus opening up new, postmodern possibilities for encounter and dialogue. However, this process also has been perceived with suspicion from both sides. On the one hand, some philosophers accuse CPOR of a crypto-theology that colonizes philosophy; on the other hand, theologians often regard it as a Trojan horse designed to further weaken the fundaments of religion. This conference wishes to examine the complex relationship between contemporary philosophy and religion/theology by turning its attention to the vast field of phenomenology and hermeneutics. Its major tasks are to unveil the variety of religious topoi implicit within these disciplines and to further assess their potential for dialogue with theology.

Recent French phenomenology has expanded upon the notions of phenomenality, rationality, and the overcoming of metaphysics. Thinkers such as Levinas, Marion, or Henry have altered the very notion of transcendence and thus became valuable interlocutors for theology. Levinas’ work has been appropriated within theology, even within Catholic dogmatics, to the point of provoking some opponents to mock of his becoming a new Church father. In general, there is increasing awareness among theologians that theology cannot immunize itself from the ongoing weakening of traditional metaphysics and its assumed overcoming. Marion’s phenomenological thought has perhaps the highest, yet vastly unexplored potential for theology to respond to this challenge. What is required, on the one hand, concerns a thorough consideration of Marion's theoretical presuppositions without too quickly domesticating his terminology (e.g., saturation, revelation, gift, etc.) within a theological discourse. From the side of philosophy, on the other hand, Marion’s phenomenology rightly demands an attitude of bracketing the recurrent prejudices concerning a hidden theological agenda. Given this, the critical reception of this work allows and even necessitates the pursuit of general questions (as does every phenomenology of religion) in our search for a fragile equilibrium that neither hides behind a "methodological atheism" nor drifts into an unavowed theology. But tracing the line of demarcation also is an issue for theologians: are those philosophical topoi bearing a strong religious affinity (e.g., the call-response structure, topologies of the gift, love, gratuity, etc.) that we find at work in contemporary French phenomenology of religion (including thinkers like Chrétien, Lacoste and Falque) compatible with concrete religion(s) and their theology(ies)? And if so, to what degree? Do re-appropriations of Christianity (such as in the case of Henry's phenomenology or Vattimo's hermeneutics) deepen and enhance religious discourse, or do they rather run the risk of violently distorting the original self-understanding of a concrete religion?

Unlike phenomenology, hermeneutics always has maintained strong ties with theology, especially within a Judeo-Christian context, since this tradition was one of the birthplaces of hermeneutics. The kerygmatic character of the Christian message and its inherent historicity still forms a natural affinity to philosophical hermeneutics, which, since Heidegger, has extended its ambitions to promote an all-encompassing role of understanding, overshadowing and replacing the role of ontology. But this development of hermeneutics has led, simultaneously, both to proximity with and distance from theology. The constant weakening of ontology (disqualified as a strong and violent metaphysics of presence) has put in jeopardy the concept of transcendence, which traditionally has been at the core of religious self-understanding. This deconstructive (Caputo) and “nihilistic” tendency of hermeneutics (Vattimo) has not been accepted without contradiction. Indeed, it recently has been countered by its “metaphysical” opponents (to use Grondin’s terminology), who advocate for a “constructive” ideal of Gadamer’s method and for the reconciliatory character of Ricoeur’s hermeneutics. In Greisch’ hermeneutical anthropology, to mention just one example, still remains the “function meta” after the decline of traditional metaphysics. Finally, a truly unprecedented challenge for religion/theology is raised by the recent turn of hermeneutics towards sensibility and corporeality. This twist is recognizable not only in “carnal hermeneutics” (Kearney), but also in inquiries into the cosmic dimension (cosmopoetics in Caputo) or the “sensible transcendental” (Irigaray). All these lead to new, explicitly “material” understandings of religiosity.

As this short description has demonstrated, it is difficult to assess whether it is within the philosophical or the theological landscape that the variety of contemporary re-conceptualizations of the religious incites greater controversy: to start this inquiry, explore the related controversies, and assess their potentials for both fields, is the major intent of this conference. Thus viewed, it seeks to provide a place of encounter for different approaches to religion within the broader context of phenomenology and hermeneutics. It also welcomes contributions from other relevant disciplines – in particularly theology, with its own internal diversifications and confessional differences – that might help highlight the afore-mentioned tensions, and enrich the dialogue between philosophy and theology today.

Paper proposals with the title of presentation and an abstract of no more than 200 words should include the author’s full name, contact address, institutional affiliation and academic position. Please send them to luka.trebeznik@teof.uni-lj.si.