It's Time to Go: United States Conservative Secession is Here 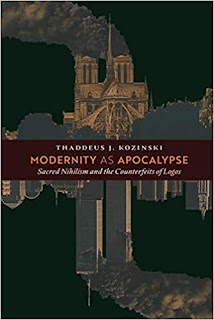 Modernity is apocalypse. If you can't see that you soon will. As early as 2014 I predicted the acceleration of this apocalypse, based only however on a prognostication from a much more capable philosopher, that of Nick Land (see my "A Humble Attempt to Introduce the Philosophy of Nick Land, HERE). In many ways Land's accelerationist idea of hyper-fragmentation makes even more sense now than it did then. In short, Nick Land is a prophet and what he has prophesied has turned out to be true.

The United States is fragmenting, and quickly. Yet also, there is a cultural fire that has slowly been consuming more and more, and becoming hotter and hotter. Near its peak, how will things turn out? What will be left after all has been consumed? Is there a place, a zone, where freedom might continue to live?

There are philosophers who have provided us with some clues, some pieces of maps, who have already forecast the condition. It is to those philosophers to whom we must turn. Contemporary, Nick Land. And adding in from the history of philosophy and literature, Ernst Junger (1895-1998).

That said, I direct you to below where you'll find a few important Landian After Nature posts on Land's work, as well as a book recommendation. These posts - written as far back as 2014 - were written  in the spirit of secession, in full cognizance of the oncoming cultural apocalypse. Not because I am a conservative, but because  afterall, the Jungerian anarch - the spiritual reactionary - wears chameleon like colors until the end, until it's time to go.

In some sense the ship has already sunk, or better, the city already burned to the ground. Liberalism's sacred nihilism revels in its own continual self-destruction.  The endless self-loathing and self-destruction is never enough, yet it fuels the elan vital of those spiritual reactionaries who sit back and watch the world burn. It is the reason why the forest flight was necessary - from warrior, to worker, to anarch, to forest fleer, to ...

Inner emigration is a tricky game. In order to "cross the line" as Junger puts it, one must be able to forecast conditions. Nick Land is extremely good at doing that.

This article, "Secession fever spikes in five states as conservatives seek to escape blue rule" uncovers the already-emerging blue-prints of a US divided into self-governing new states.


Nietzsche, the other great prognosticator tells us that,


"Pity is the practice of nihilism. To repeat: this depressive and contagious instinct crosses those instincts which aim at the preservation of life and at the enhancement of its value. It multiplies misery and conserves all that is miserable, and is thus a prime instrument of the advancement of decadence: pity persuades men to nothingness!”


“Being nationalistic in the sense in which it is now demanded by public opinion would, it seems to me, be for us who are more spiritual not mere insipidity but dishonesty, a deliberate deadening of our better will and conscience.”

And finally, an interesting book parallel to our reaction against liberalism's sacred nihilism.

Email ThisBlogThis!Share to TwitterShare to FacebookShare to Pinterest
Labels: accelerationism, Nietzsche, quote of the day

Is Socrates’ politics theological? Or is a Blackwing pencil created by the gods? 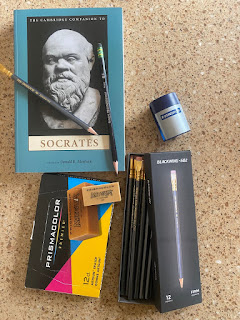 I decided to present to my readers a photo of my note-taking gear used for reading and doing research.

So, it's kinda a thing with me. Never read without a pencil. It's always been like that. And it shall always be so in the future. However the thing with me is that basically all of the world's pencils today suck. They break, they cannot erase or destroy your paper if they can, the graphite is weak or strained and smudges easily or disappears. Just, today's pencils are horrible. Gosh, any yellow pencil I have ever used wasn't proper for writing down anything.

But then I discovered two pencils in particular, and now knowing them and using them, they are essentials.

One is the Ticonderoga pencil that you can get from the Dollar Store for, yes, somewhere around a dollar. Crisp and clean graphite lays down nicely and evenly, fine enough wood, fine enough eraser but using a separate eraser is advised.

The Blackwing 602 however, *changed my world*. Yes, we are talking about a pencil. If you read the reviews, the rumors are true. I myself had my doubts. But no, it is indeed the single most greatest pencil on earth. Throw the Staedtler pencil sharpener for a superb writable point into the mix, and to the side have handy your Artgum eraser (with these two items you will have the cleanest, razor-fine point ever and an eraser that absolutely will not nor ever smudge picking up perfectly any and all graphite - and the eraser's gumminess is so addictive to squeeze in your hand as you read), and you have the ultimate note-taking armory.

The Blackwing writes so smoothly, it glides with "half the pressure twice the speed" putting down to paper buttery and smooth graphite cleanly and evenly. I will spare you the full review (I am not sponsored by these products) but the Blackwing Palamino 602 is not just an ordinary pencil. It is not just any pencil that could be manufactured by anyone. No.

It is a pencil created by the gods.

An amazing paper on Schelling: Sean McGrath - "The Ecstatic Realism of the Late Schelling" 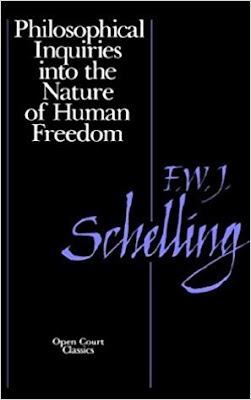 Saw this in my academia feed and after a quick initial read (a more careful second read is pending, time permitting) I must say that this is probably one of the best papers I've seen concerning Schelling within the past decade, if not ever. Absolutely amazing. Check it out, HERE.

Sean McGrath - "The Ecstatic Realism of the Late Schelling" 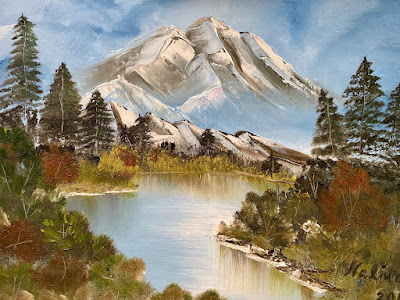 The Tenth International Congress on Ecstatic Naturalism will be held on the Drew University campus on April 18 and 19, 2020. As this will be the last Congress, the topic is open, although papers on the topic of climate change will be especially welcome. All that is required is that your paper mention however minimally some aspect of ecstatic naturalism.

Please send an abstract of your proposed paper with a title to corring@optonline.net. Please indicate if you are interested in competing for the Emerson Prize ($500) for the best paper by a junior scholar. If you wish to be considered for the prize, we will, of course, need the full paper (by March 25th). The criteria for the Emerson Prize are: 1) you must be either a student or have received your degree no more than five years earlier, 2) you have not won the prize before, and 3) your paper must be on ecstatic naturalism.

“The Lure of the Maine Coast and the Ticking Clock”

Corrington has put up a nice little post ruminating about the Maine coast's aesthetic virtues. For those not aware, Robert retired end of the fall 2019 semester - where afterward he and his wife relocated to the Maine coast. Maine always was (and still is) a special place for me (and Na) as well: its beauty unparalleled in mystery and majesty. I remember I wrote a large section of my first book there, and subsequently a few articles while overlooking our favorite place to go, Moosehead Lake. Naturphilosophie.