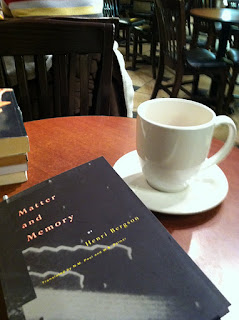 HT Karen Oyama.  Will also be posting these in the After Nature podcast section (check for updates).

I found out today that I'll be publishing my review of Hartshorne's Creative Experiencing (preview HERE and HERE) in an upcoming issue of American Journal of Theology and Philosophy.  It'll be some months before the review appears, but I'm glad to have it in there as the European Journal of Pragmatism and Philosophy said the review had to be an essay, but at last minute.  So, AJTP is the better venue for the review and I am glad that all worked out.

Also in American Journal of Theology and Philosophy you'll find my review of Pugliese's The One, the Many, and the Trinity: Joseph A. Bracken and the Challenge of Process Metaphysics.  There's much in Puglieses's book about Whitehead and process theology, for those interested.  That review should appear in the next issue.

A reader asks for some clarification on how I'm using "correlationism," from my last post.

In a very broad sense, I am pointing to 20th-century Continental philosophy which supposes that, "the human and world only come as a pair."

Now, I oppose philosophies which outright deny correlationism without making the move through it, which for me means encountering a number of issues: transcendentalism, panpsychism, and the possibility of nihilism.

However, I can say that correlationists and non-correlationists alike influenced my own view (Meillassoux is a correlationist for example, but only after having deconstructed a variety of correlationism found in post-Kantian philosophy does he offer his own reconstruction of it - ending up very close, but not identical, to the idealism of  Hegel - not ontologically, but epistemologically, knowledge of the Absolute which is not thought but material devoid of subjectivity - an inverted Hegel yet with the same correlationist strength). 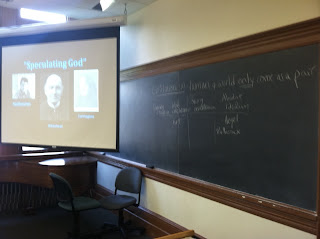 Finally, the point of using "correlationism" in my last post was this: post-Kantian philosophy, most especially postmodernism, states that the reality's being conditioned necessarily always refers back to the human who is doing the conditioning.  And this can happen through the deconstructive reading of a text, through the hermeneutic act of interpretation, through the semiotic use of a sign, through a phenomenological description of reality, et cetera.  To address whether "being and thought" come as a pair (for me at least) refers to human thought - and to parse that out honestly would cost me an article rather than a blog post.  The worst kind of correlationism is the sort which puts the human at the middle or which states that reality wouldn't be what it is without the human thinking it.  But this is not to say that the human doesn't re-enter the picture, nor even that thought (better, "perspective") isn't an essential piece of the puzzle.

It seems the best way to approach correlational philosophy is to first displace the human, albeit temporarily, but then re institute relational value in the form of the assertion of powers (the human but one among them), and then, to a degree, re-institute a naturalized form of "immanent transcendence" (where transcendence first means: crossing that line which encloses the human being).  This because it is my view that no adequately philosophical realist position could deny either the reality of internal and external relations, or the temporal structure of generals, or even non-nominalistic assertions concerning the generality of "tropes" or "particulars" while trying to make a theory of "pure immanence" work.  There is no such thing as "pure immanence" any more than there is an absolutely "flat ontology."  Speculation, if anything, requires transcendence.

Even categorically, the assertion of (and philosophical expectation of theoretical acceptance) of fundamental types (natural complexes, "objects," individuals, or whatever) would demand a theory of the transcendental - even in its denial.  On this I side with both Leibniz and Hartshorne, summed up in Hartshorne's 'Some Formal Criteria of Good Metaphysics') (citing from Hartshorne's book, Creative Experiencing...)


Criteria One: Leibniz’s proposition that metaphysical truth is all positive (mistakes in metaphysics are in denials, not assertions. What is to be denied in metaphysics is itself negative, and a double-negative is positive).  Therefore, metaphysics is rational but also speculative: it is the assertion of “what makes positive sense” – rationally, logically, and mathematically.

Criteria Two: No category is so absolute that there cannot be at least one contrariety equally affirmed (no category is a “mere” category).  Hartshorne writes, “[P]ossibility and actuality belong together, there can be no such thing as ‘pure actuality,’ actus purus, no such thing as the merely infinite or merely finite….[B]oth poles of ultimate contrarieties must be affirmed” (Hartshorne, 2).  To affirm opposite poles of a category is not contradictory for S is P and S is not P are always affirmed in difference aspects of S.  To this “unity of contraries” I would add that, by Hartshorne’s logic, there can be no “merely” transcendent against a “purely” immanent.  Hartshorne writes that “Hegel saw this and Peirce and Whitehead saw it” (Hartshorne, 2).

Criteria Three: Wisdom as moderation of metaphysical positions.  “[G]iven an extreme position to which there is a contrary extreme, the truth is a mean between the extremes….Extreme monism is false and extreme pluralism is false….The truth is a moderate monism, which is also a moderate pluralism” (Hartshorne, 2).

Criteria Four: The Principle of Contrast.  “The function of a concept is to distinguish something from something else.  To say everything is necessary and nothing is contingent is to deprive ‘necessary’ of any distinctive meaning.  The same with saying everything is contingent….The Stoics and Spinoza, with their necessitarianism, and William James, and countless others with their contingentism, were all extremists.  The Principle of Contrast is a fourth way of stating the Leibnizian-Hegelian principle” (Hartshorne, 2).


And from my book review of Creative Experiencing:


[P]ositive metaphysical truth can be stated, but only given coherence among mutually compatible positive instances of statements: their opposite being necessary untruths or impossibilities.  Hartshorne notes that, “Specific ideas coming under universal categories are contingent in their application because they come in mutually incompatible but positive options….Choosing is not between a positive and a merely negative, but among positives” (Hartshorne, 47). Metaphysical speculation is thus necessarily a positive science, but is limited by what is untrue or impossible.

Disco is dead, and so is correlationism


Peter Gratton posts HERE. But disco is dead too, right? 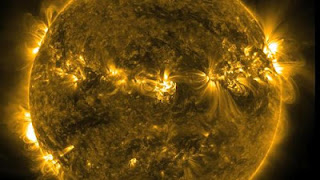 Found this audio file online (credit to AUFS blog).  I downloaded the file and converted to mp3.


"For some time now I have maintained that the only hope for theology to breakout of it present day deadlock is through Hegel..."

[T]ranscendence for Hegel had to risk its very being for it-self in order for transcendence to fully realize itself in materialism as such–so that transcendence could fully realize its being in-and-for-itself. In short, it is clear that Hegel’s ontological structure of the negative provides theology tools by which to realize the truth of its own discourse–a movement of risk, of embracement, and above all, of love....

This is why it is absolutely crucial to engage with the work of the Irish Catholic philosopher William Desmond. For it is Desmond’s work that calls us to radically re-think Hegel’s project on many different and interactive levels....It is my belief that Hegel is not the same without really reading Desmond.  More radically, this book posits the question: Could it be that Desmond is that which saves Hegel from himself!  And, if so, does not this very possibility change the coordinates of theology (and Continental Philosophy) today? 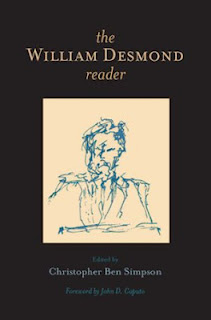 Read the full post HERE.  Foreword to the Desmond Reader is by John Caputo.  Info on the reader is below or HERE at the SUNY website.


Known especially for his original system of metaphysics in a trilogy of books published between 1995 and 2008, and for his scholarship on Hegel, William Desmond has left his mark on the philosophy of religion, ethics, and aesthetics. The William Desmond Reader provides for the first time in a single book a point of entry into his original and constructive philosophy, including carefully chosen selections of his works that introduce the key ideas, perspectives, and contributions of his philosophy as a whole. Also featured is an original essay by Desmond himself reflecting synthetically on the topics covered, as well as an interview by Richard Kearney.

Part II. Ethics and Ethos
9. Autonomy and Freedom
10. The Potencies of the Ethical
11. Metaxological Ethics

Part III. Religion and the Philosophy of God
12. Agapeic Origin
13. Breaking the Silence
14. Godlessness
15. Beyond Godlessness
16. Hegel’s Counterfeit Double
17. God and the Metaxological Way
18. God and Hyperbole
19. God beyond the Whole
20. God Being Over-Being: A Metaphysical Canto

Part IV. Aesthetics and Philosophy of Art
21. Being Aesthetic
22. Being at a Loss: On Philosophy and the Tragic
23. Art and Transcendence

Part V. Retrospections and Reflections
24. Wording the Between
25. “Two Thinks at a Distance”: An Interview with William Desmond by Richard Kearney on 9 January 2011