My discussion considering how idealism is a realism seems to have provoked more than a few curious onlookers in the blogosphere (to read that post, see HERE).  Although, ... 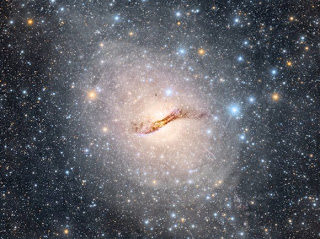 I happened to stumble upon an old blog post which I can repost below for the curious to read.  Now, here is the interesting part.  In re-reading the below post I must ask, "is Laurellian non-standard philosophy an Ideal-Realism?"  And, "Is Laruelle's "in-One" an Ideal-Realism?" Perhaps the Laruellians could educate me.

But please read the below where the query of "is Idealism Realism?" comes right to the fore. Answers or retorts are of course always welcome.  My email is to your right in the sidebar.

Finally, if you are well versed in Laruelle please do not "eat me alive."  I am by no means an expert on Laurelle's philosophy but am indeed very curious about it.

by After Nature blog.

This late spring/early summer I've been re-reading some Laruelle, in addition to listening to some lectures by Alex Galloway on Laruelle (Galloway has some fantastic material out there, be sure to look it up).

Laruelle expresses “disappointment in the philosophies of difference” (as conceived in the 19th and 20th centuries, so Nietzsche, Deleuze, Derrida, and Heidegger) and is instead enchanted by the Absolute “as such.”  From reading Laruelle, it is interesting to consider the way in which his Absolute admits difference “deeply” as an "in-One."  It seems that for Laurelle, as he points out, that ontological difference is not relative but is continuous among and between multiplicities such that multiplicities are not “static” but are always immanently “in relation” in-One.  From these comments I am inspired to read more about Laurelle’s criticisms of Deleuze especially (see here: https://ndpr.nd.edu/news/44829-franois-laruelles-philosophies-of-difference-a-critical-introduction-and-guide/)

For Laruelle, the One is without unity save for difference; it is “beyond” Being – and taking that step beyond Being we go not into the emptiness of difference but a “beyond filled” with  the multiplicity of difference.  Against this notion philosophies of difference only provide “relative” multiplicities however, contained within hypostases of Being, of the Idea.  What we need then is a “new” philosophy of difference, one free of the same false promises and enslavement to multiplicities traditionally conceived.

About Laruell’s deep monistic-pluralism Terry Blake writes “The Absolute is not won through to by active and willful negation, but is attained more passively and patiently, by letting go, allowing oneself to be convinced, letting oneself be enchanted…”  In the words of Laruelle, “Consenting at last to the One as to that which keeps the multiplicities beyond Being itself.”  Enchantment is central for his project in terms of how one is to grasp the sort of difference he wants to portray.

This pluralism is more deeply committed to a deeper sense of ontological difference and relation found among and between multiplicities; it seeks non-philosophically to consider a deeper general essence that is, in some sense, “beyond” the multiple “in-One” as a generality of Being.  This seems to be a greater sense of true generality that is in-One or in-different, perhaps the One as such as multiple difference.

For more thoughts on Laruelle's non-relativist plural monism see Agent Swarm on "The Renunciation of the Mentors" HERE and "Non-Philosophy, Disappointment, and Enchantment" (HERE).

In a post from last year I've posted some introductory materials about Laruelle HERE.

Immanence blog with some helpful links in ecocritical theory 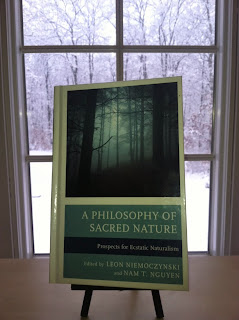 Adrian / Immanence blog has put up some helpful links pointing to recent series' publications in ecocritical theory, HERE.  Interesting as well to note he points out the vigor of Lexington Books' Ecocritical Theory and Practice series.

Lexington Books were a pleasure to work with.  I've published two books with them (A Philosophy of Sacred Nature - pictured above - and Charles Sanders Peirce and a Religious Metaphysics of Nature) and the folks at Lexington have been nothing but absolutely outstanding.

They are a solid press and are expanding.  Check them out if you can.

A1. Monism: Metaphysical (Ontological) Idealism: All is mind. No dualism possibile as any appearance reduces to mind. Reality *is* mind.

A2. Dualism: Epistemological Idealism: to to know matter "external" to the mind is to explain mind itself (cannot explain matter without mind). No monism possible.

B1. Monism: Metaphysical (Ontological) Materialism: All is matter. No dualism possible. All appearances reduce to matter. Reality *is* matter.

B2. Dualism: Epistemolgical Materialism: to explain "mind" is only to explain matter itself (cannot explain mind without matter). No monisim possible.


Is a monist realism possible? Yes, only in Hegel - so only Hegel is the true "realist."

Argument:
Premise : Realism: B2 is always A1 or A2. Realism is always an idealism.

Naive realism, same as above.

Non-reductive materialism, same as above.

Conclusion: It seems that dualistic positions are contradictory to monist ones, yet rely upon them for veracity. Only A1 can handle the contradiction. To be a materialist is to be an idealist and to maintain co-related matter and mind: dualism, requiring one side to be "more real " than the other, which begs either A1 or A2. A2 is stronger than B1 or B2, so the prior positions deduce to A1.
--

Question: What cannot be deducted back to A1? (The above was inspired by my reading of Pratt's "What is Speculative Idealism?")