Quote of the day

"The idea that unites all is the idea of beauty, taking the world in a higher, Platonic sense. I am now convinced that the highest act of reason, that in which reason contains all ideas, is an aesthetic act, and that truth and goodness are only united in beauty. Indeed, the philosopher must possess as much aesthetic power as the poet. The philosophy of spirit is [fundamentally] an aesthetic philosophy."

Email ThisBlogThis!Share to TwitterShare to FacebookShare to Pinterest
Labels: aesthetics, Hegel, philosophy of nature, quote of the day, Schelling

Some new Schelling texts, including the 1811 'Ages of the World' 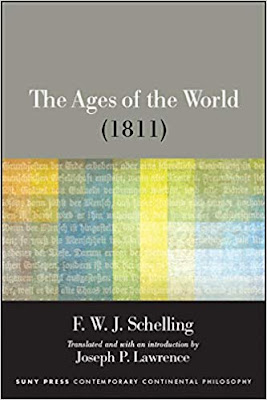 It is well known that Schelling drafted three distinct versions of his Ages of the World (Weltater) in the years 1811, 1813, and 1814/15. Until now, the last two had been published under the same name by SUNY and the 1813 version was published as The Abyss of Freedom. Now, many years later we finally find the 1811 version (the first version) of Ages of the World published by SUNY. This is truly a landmark event in Schelling scholarship.

Interestingly, a smaller publishing house has published the 1841-42 lecture “Philosophy and Revelation” as On the Doorstep of the Absolute. This was the same house that published Schelling’s 1804 Philosophy and Religion back in 2009. I remember that I had made some very good use out of that when I was working on my dissertation, so it is interesting to see a related lecture published all of these years later as I have circled back around to German idealism and romanticism. 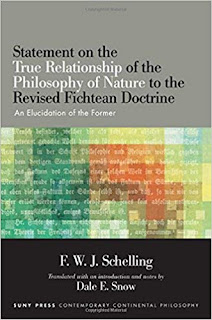 Finally, we find Schelling’s Statement on the True Relationship of the Philosophy of Nature to the Revised Fichtean Doctrine published this year, which consists of his scathing reviews of Fichte. I've just come off of a fairly intensive year-long study of Fichte so the timing for me is impeccable. Other than Fichte and Schelling I have been working with Kant and Hegel quite abit.