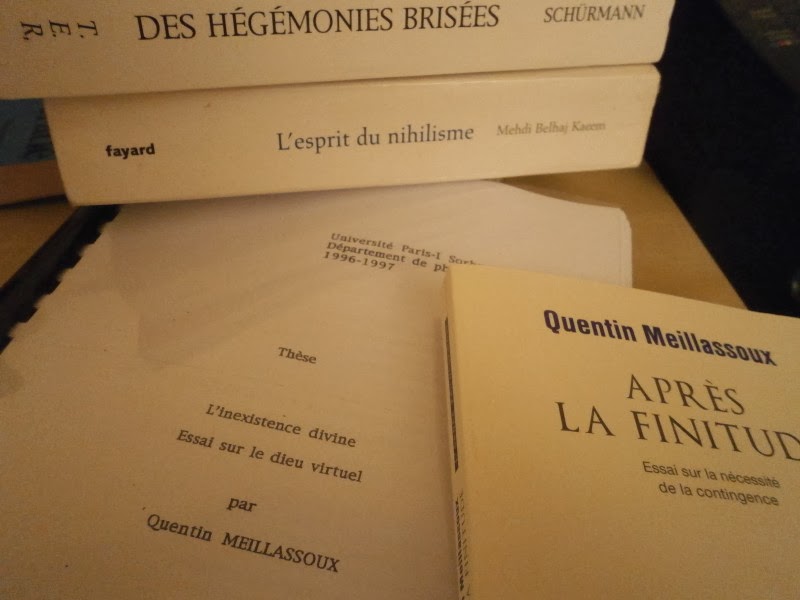 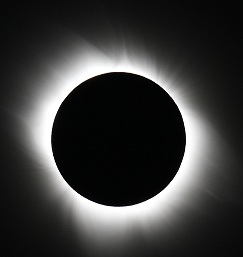 "A cold wind blows across empty space.  Dark matter obscures the sun.  Wreckage of exploded stars drifts in the void, the ruins of a solar system, burned-out at 3,000K, radiating annihilation in all directions.  A single beam of light, cutting through the gloom, frames the silhouetted body of a dead God, stretching cruciform across the galaxy, face taut with pain, spikes wounding wrist and ankle - borne continually upwards towards the vault of the Heavens, where divinities go to die, but all the while drawn down into the abyss below...

Shadows black out the horizon in a single stroke.  Morbid expectations of apocalypse.  Ledgers kept in minute detail plot the geometries and timescales of the end of the world.  Vertigo and nausea proliferate, requiring that the stomach expands to accommodate ever greater magnitudes of sickness.  Pulsing chaos tears apart the fabric of the universe...

So what was it that ruined this passional gothic theatre of obliteration?  What was it that robbed us of the cosmic spectacle of all sinners falling to their knees, hands outstretched in terror, before being wiped out in the final holocaust of divine judgment?  It was this:  something like divine order without God."

Aion, the dark precursor.  A kind of cosmic unconscious that, like Nietzsche's Dionysus, is the god of indestructible life, joy, and power; though like Abraxas, progenitor of Nous, is full of sorrow, melancholy, and tears.  A profoundly schizoid God - divinity, a One that is many - a divine impersonal process of both frozen eternity and creative thawing.  Matter frozen in hindsight, empty, dead husks of matter whose cold exterior hides spiritual interior, like the frozen surface of Europa, Jupiter's moon.

Deleuze writes that "God..[is]...himself a modification of modifications."  Or, in Schelling's words, the Absolute involves a divine game of chance, but also love.  Wrath precedes love.  Darkness precedes light.

Ungrund, Urgrund, Abgrund.  The Dark Pleroma.  The depth of the world, the abyss, home of countless "little divinities."  Surplus and abundance of intensity, not just light and life; sorrow, darkness, and death.

"Such a becoming God as the becoming depth of nature is not a fundamentally singular God, but rather an elohimic multiple,' an originating beginning as difference, a multiplicity of differences-in-relation, a multiplicity that as such is the relational..."

Unrecognizable, a dark origin.  A self-expressing dark origin, "out of which all comes to be and into which all things pass, as into an ultimately inarticulate night."

A bright abyss that overreaches thought.  The vital negative, intensive "0" or Being of zero degree.  Fecund non-existence that may give birth even to a God (Meillassoux), the virtual πλήρωμα.

A bit dated review (from 2012) but I believe the more affordable paperback version of Watkin's book only came out last year, so it's really only been available for the casual reader for not too long.

Email ThisBlogThis!Share to TwitterShare to FacebookShare to Pinterest
Labels: Meillassoux, metaphysics and theology

MBK's forthcoming book The Meillassoux Effect (2014) has some arguments that are nicely laid out by Terry Blake of Agent Swarm blog (links below).

on the tragedy of life

Although I am not technologically savvy enough to figure out how many times any one specific mp3 has been downloaded from my blog, I was amazed to see that quite a number of folks downloaded the only two items that I've posted to my academia.edu page (which does have a counter) in the mere week or so that those items have been up.

I am guessing that the mp3s posted on my blog are downloaded frequently, as those links on my academia page received some great traffic in a very short period of time, and the majority of the downloads on my academia page were routed from my blog (furthering my thought that while not many people actually use academia.edu on a frequent basis, it still can be a great source of exposure for one's work).

The topics of the lectures deal with melancholy and my position of "bleak theology" or "bleak metaphysics," part of my overall project of speculative naturalism.  I am amazed by the response that I've gotten so far and am encouraged by how many folks downloaded the talks in the week that they've been up.

For those interested, the bleak metaphysical perspective is something that I've been working on behind the scenes for awhile.  For the foreseeable future I plan to keep reading/researching in this area.

"Speculative Naturalism: A Bleak Theology in Light of the Tragic"

"Melancholy and the Otherness of God"

And speaking of bleakness and melancholy: Schopenhauer, Nietzsche, and their connections to a bleak perspective make appearances rather timely for me in this recent 3:AM interview HERE.

The latest issue of E-flux is now out, and perusing it I have been reading Negarestani's latest piece HERE. It is highly recommended if you haven't looked at it already.

Mute magazine is also on fire having published papers from December's Accelerationism Symposium.  (As an aside, I found an intriguing article by Simon Mussell from an older issue HERE.  The article incidentally mentions yours truly in its first footnote!)

Although principally associated with a thesis in the philosophy of mind, functionalism has wide-ranging ramifications. The concept of "functional role" or "functional organization" ties together a metaphysical problem about the basis of the distinction between matter and form, an epistemic problem about how to distinguish semantic content from physical information, and an engineering problem about the relation between structural and functional properties. This workshop will try to unravel the metaphysical, epistemic, and engineering aspects of functionalism by developing themes from the work of philosophers including William Bechtel, Robert Brandom, Wilfrid Sellars, and William Wimsatt.

Hosted by the Center for Transformative Media at The New School.

update on my book through Open Humanities Press

I heard from Joanna of OHP yesterday and now that the first draft of Animal Experience: Consciousness and Emotions in the Natural World is done she states that it should be about three months of review and editing until official publication of the book.  We have been told that the book (hopefully) will appear before the end of June.  As After Nature readers know, last year we began work on the book which is to appear through Open Humanities Press' "Living Books About Life" series.

Now that we are finished and have some hindsight on the project, I am proud to say that I am quite happy with how the book turned out.  There is a fairly large introduction, an extensive bibliography, and a table of contents featuring some very interesting cutting edge research.  The most intriguing part, I think, is the last section which focuses on philosophical views of animals and the emotions.  There you'll find work presented by Philippe Descola, Isabelle Stengers, and Bruno Latour.

Others who have published in the series include Dave Berry, Jussi Parikka, Claire Colebrook, and Steven Shaviro, to name a few.

I am excited for After Nature readers to see this new volume of OHP appear!


Living Books About Life from Peter Woodbridge on Vimeo. 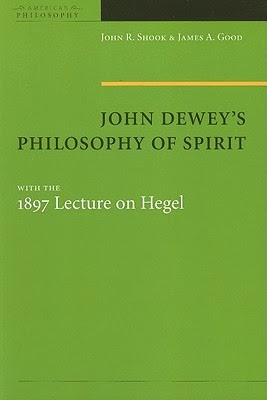 Krista contacted me from Incredible Machines 2014 and I am glad that she did.  I am hoping to participate via google (by watching and hopefully getting  chance to ask a few questions etc.).  Here is the info on this interesting looking conference...will just copy it below.

"In beauty in general, reason sees sensibility fulfilling its demands for objectivity and unity; and to its own surprise, one of its own ideas confronts it in appearance.  The surprise of beauty is something we thought belonged only to the world of ideas and reason, but this unexpected harmony awakens a feeling of joyous approbation and an attraction to the sensible object as a result.  We call this attraction benevolence or love."

Meillassoux dictionary on amazon for pre-order

HERE, in the UK.  I wrote the entries on "divine inexistence" and surrounding concepts such as "spectral dilemma," "resurrection," "the child," "irreligion," and a few others.  I used the The Deleuze Dictionary through EUP as a "go by" for formatting and length of entries etc. etc.

For those interested I just re-posted onto my academia.edu page HERE a talk that I gave on Meillassoux's connection to process theism. 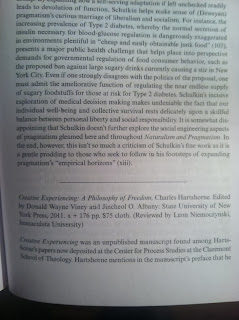 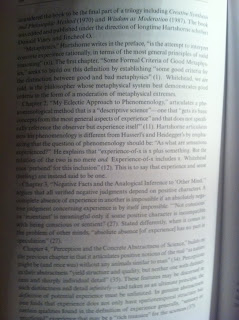 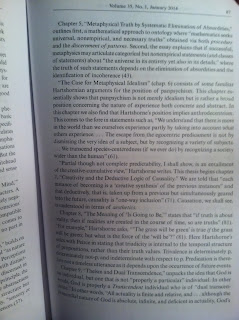 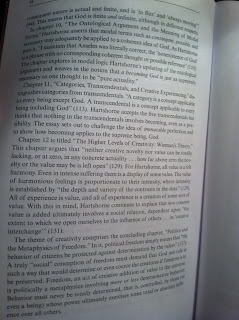 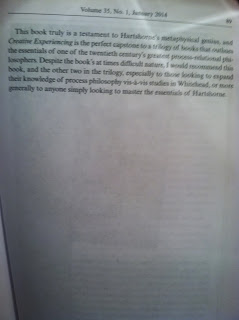 My review of Hartshorne's Creative Experiencing has been published in the latest issue of American Journal of Theology and Philosophy. (Click photos for larger image to read.)

A copy of the original and lengthier form of the review can be found in two parts HERE and HERE.

HERE.  I think this should work.

Today I am struggling to edit/upload P.E.S.T. mp3s.  Audacity is far from intuitive for me, and that has been true for quite some time.  It's the reason I rarely upload any audio of my own.  Although, I suppose if I'll be learning how to podcast Audacity is something that I *must* learn.

Listening to the "Speculative Misanthropy" mp3s had me thinking about Sartre's "No Exit."  I really never tire of Sartre.  I'm in a minority of folks who actually enjoy his writing style.

Sartre described consciousness as "an open wound," afterall.  So true.