We are pleased to announce the publication of Pli Volume 22: Contingency.

To purchase the volume and to see a list of currently available past volumes please visit our website.

It is not well known that Northern Wisconsin is heavily forested and has quite a number of trails, lakes, camping sites and other outdoor activities.  There are also plenty of interesting animals such as mountain lions, black bear, deer, coyote, wolves, and elk.  I first heard about the wildilfe and forests of Northern Wisconsin while watching documentaries about the large Native American population that resides there (the Wisconsin channel has some great programs about this, as well as about the Northwoods).  In addition to serving the needs of the Native American communities, these remote areas also offer beautiful sights and hikes for naturists such as myself.

I'll be making a four hour drive to Wassau, and once there I'll make my way over to the Ice Age Trail, back over to Nicolet National Forest, and then back down to Devil's Lake.

The plan is to read Chapter 1: Ancestrality, in After Finitude.  You should download the reading pack which contains some other articles that we'll be looking at (including Meillassoux on God and virtuality, the Collapse roundtable, as well as Caputo's syllabus which puts things in context, although the syllabus is not specifically on Meillassoux).

Finally, audio for the first half of the first lecture is HERE.  The lecture really doesn't begin until about 30 minutes into it.  Note where Caputo calls out Meillassoux on Husserl and phenomenology, as well as for lacking citations concerning Heidegger.

Corrington suggests Aristotle's Metaphysics in a recent translation by Joe Sachs of St. John's College, Annapolis.  He mentions that it brings Aristotle down to earth for students and faculty alike, and seems to have a slightly Heideggarian reading--which he and I share.  For example, Sachs translates energeia as "being-at-work."

Corrington also mentions that, "Aristotle will be ordinal and radically open to nature naturing--perhaps through ousia or phusis or dunamis."

Email ThisBlogThis!Share to TwitterShare to FacebookShare to Pinterest
Labels: Aristotle

Whitehead’s Misconception of “Substance” in Aristotle

the problem with Lucretius' (Epicurean) ethics

The Epicurean philosophers emphasized pleasure as an absence of pain in the body.  As well, they held that matter is eternal and death a final end.  For these philosophers there was no creative deity active in the world nor was there said to be any providential control over human affairs.  With these few theses stated it is hard to see how authentic human freedom, real ethical choice, and human happiness all fit into the picture.  But the Epicureans did believe that human happiness was possible, and that an element of spontaneity was active in the universe.


The Epicureans believed that life was at the mercy of atoms in motion.  Ataraxy (happiness, but more literally “unruffledness”) meant just that one could marry and have children, attend religious services if one so chose, or that one could be a kindly neighbor.  But with life being matter, the only real gauge of conduct was pleasure, defined simply as an absence of pain.  Philosophers such as Epicurus and Lucretius did attempt to advance the idea that within their material ontologies an element of “swerve” was at work, one that could initiate new causal chains and thus enable something like real ethical choice.  Their goal was to break logical and physical determinism and to make room for human freedom and an ethical human will.  However, this turned out to be problematic.  For thinkers such as Epicurus and Lucretius, we cannot hold our will morally responsible in any ultimate sense simply due to the nature of the material causal chain in place in the cosmos (this despite the swerve, their dictum being “wherever pleasure leads us.”)  One may live an ethical life, but its ultimate significance is meaningless given the finality of death and the nature of a cosmic void.  Of course here the crux of my analysis hinges on the word “ultimate.”

As I see it, one need not invoke traditional ultimates, for example rewards for goods or punishments for evils in an afterlife, in order to save ethics or to save something like valuation (i.e. “good” and “evil” – or value claims in general, for that matter).  The Stoics, as opposed to the Epicureans mentioned above, did admit a place for ultimacy in the universe, but that sense of ultimacy did not center on otherworldly reward and punishment.  For the Stoics, rather, nature was an ultimate, conducive with a guiding principle of reason that struggled toward consummation.  Thus, nature, on the Stoic view, was not just material, but said to include reason (as a sufficient principle and logos): a manner of accessing the ultimate.  Reason, being fully natural (specifically human reason, but reason was also taken to be a ubiquitous principle and thus presumably it permeated the world) was thus said to be essential for ataraxy.  Ultimacy for the Stoics was the peculiar potential of the human as a distinct creature (not a superior creature) to achieve ataraxy by means of autarky, by identifying one’s self with nature and by using reason.  Being a natural being and a rational being were said to be one.  Thus, reason takes on a special (for the Stoics “divine”) significance.  And so a similar, but much better picture than the Epicurean one, in my judgment, is offered by the Stoics.

For the Stoics, autarky or self-sufficiency is compatible even within a material ontology in place.  And by identifying with nature, the Stoics took the view that behavior was “as nature would have it.”  For some this would be called Stoic apathy.  But in this particular sense apathy is not listlessness but rather “imperviousness to perturbations.”  Even death is not a mute end, blank or representative of void (as in the material ontology), death is in accord with nature being fully part of it, and hence being natural it is rational (even hastening death if it prevents enslavement and preserves autarky is more “natural” and "rational" than attempting to compromise natural forces).  With this in mind, while sharing a similar physics, the Stoics therefore had a superb use of reason, logos, or account of nature and the universe, when it came to ethical issues.

Finally, for the Stoics, the universe, while including spontaneity, also included accrued (statistical) order.  Order arises from tendency (i.e. Leibniz), and for the Stoics such a tendency creates world cycles, each struggling to consummate itself (something like Whitehead’s cosmic epochs).  Moderation was the order of the Stoic outlook - there was no room for radical self-sufficiency where the individual was set to somehow "defeat nature's way."  Individuals were just that, individuals in a rational, but also tragic, universe.  With this idea the Stoics wanted to enjoin "life in accordance with nature," and not assert any form of self-sufficiency against it. For this reason life in accordance with nature was inevitably tragic as our ordering of the world may not necessarily be nature's ordering of the world.

Seneca's writings stand out as the most profound to me, but also Epictetus.  Both were sensible toward weakness and misery, as well as pain. Ethical disorder in an ordered cosmos meant that pain and suffering have their part, if real spontaneity was true.  Unity and order, coupled with reason, shows that the human being may accustom itself to conditions and circumstances *ultimately* beyond human control.  Whose control, then?  But first, a second question.

The answer to both questions here is that, like Buddhism, the Stoics thought that the power behind ethics is within our own "self control," and so autarky comes to mean choosing to control those impulses which attempt to defy the material and natural world, and this is what allows us to remain indifferent to illness, pain, and death.  In other words, indifference is within our control because it is internal as a matter of self impulsion.  With the guided use of reason, one may properly respond to life through simply internally responding to - by choosing to accept - a world that "makes us."  Like Buddhism this is not to shun the dark and painful features of life, or to shun the natural (and rational), material world.  Rather, it is to accept things as they are, fully natural and material, but also to act with a reason present within, as a matter of choice and ethical living, as fully natural beings, to be enlightened as to the true nature of things distinct from our distortions of them (a goal of realist metaphysical query).

Now out, and a reminder about the new translation of the Beitraege.  The Heidegger of the '30s is my favorite by far.

To my mind, the '30s Heidegger is the least anthropocentric.  In fact, it is this Heidegger which moves from exploring the structures of Dasein (the person asking the question of Being) to asking the question of the truth of Beyng itself.  And thus Heidegger to the best of his ability wants to move outside of the correlationist circle.  This is what makes the Beitraege an extremely poetic work, as it seeks to think from the perspective of the real itself - a processive eventuation that ontologically encompasses the human but is not of the human.

The goal is to think "Beyng" - "Beying" rather than "Being" is an archaic spelling that Heidegger consciously borrows from Schelling and the German idealists.  This means to step outside of the correlationist circle while admitting that the circle may be opened ancestrally within the being asking the question.

Perhaps stated differently: I find that in this book Heidegger seeks to "non-humanly" think from within the real - in a strange way, Dasein is not "human" at all. 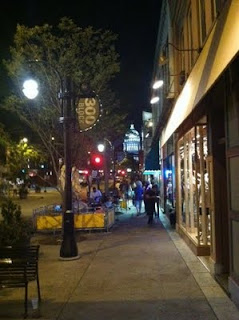 Hartshorne on panpsychism.  Some good references to Leibniz in this.

A nice commentary on panpsychism.

Is God a mathematician? The meaning of metabolism

An interesting appendix essay about Whitehead in the chapter titled, "Is God a Mathematician?  The Meaning of Metabolism" written in Hans Jonas' The Phenomenon of Life.  A nice little compact series of essays to read for the plane ride over to Pennsylvania.