More on Juenger (video and links)

Juenger, equally admired and chided.  Eumeswil is his best sustained work of philosophical fiction and certainly worth reading. Link to the recently released version is below the video.

The video playlist below is actually quite good if one is unfamiliar with Juenger, informative of things other than the controversy surrounding his apoliteia - though one does find some mention of it. 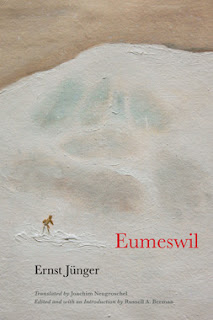 Eumeswil, ostensibly a post-apocalyptic science fiction novel, is effectively a comprehensive synthesis of Ernst Jünger’s mature thought, with a particular focus on new and achievable forms of individual freedom in a technologically monitored and managed postmodern world. Here Jünger first fully develops his figure of the anarch, the inwardly liberated and outwardly pragmatic individual, who lives peacefully in the heart of Leviathan and is yet able to preserve his individuality and freedom. Composed of a series of short passages and fragments, Eumeswil follows the reflections of Martin Venator, a historian living in a futuristic city-state ruled by a dictator known as the Condor. Through Venator, the prototypical anarch, Jünger offers a broad and uniquely insightful analysis of history from the post-histocric perspective and, at the same time, presents a vision of future technological developments, including astonishingly prescient descriptions of today’s internet (the luminar), smartphone (the phonophore), and genetic engineering. At once a study of accommodation to tyranny and a libertarian vision of individual freedom, Eumeswil continues to speak to the contradictions and possibilities inherent in our twenty-first-century condition.