Interview with Ray Brassier by After Nature blog © 2012 & 2016. This interview has been published in full in Speculative Realism: An Epitome (Leeds: Kismet Press, 2017), available for purchase HERE.

Ray Brassier is so far best known for his popular work, Nihil Unbound: Enlightenment and Extinction (Palgrave Macmillan, 2007; 2010). After Nature blog had the pleasure of asking Ray a few questions about his book, as well as about some of his recent talks and upcoming projects.


L. Niemoczynski: How did you first become interested in philosophy, and what led to you to decide that you’d like to pursue a career in philosophy (whether teaching or research)?  How did you end up in your current position at the American University of Beirut? 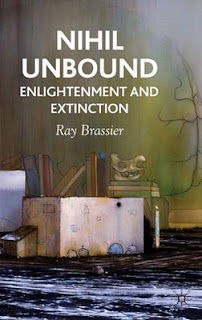 Ray Brassier: I became interested in philosophy when I was relatively young (13), but it took a long time for me to decide I wanted to pursue it academically. I did not enjoy school and had no desire to go to university, which was not an option anyway since I was a terrible student and did not have the requisite qualifications. I was 27 when I eventually managed to enroll for a philosophy degree at university. I decided to pursue it as far as I could simply because it was more important to me than anything else. But I had no career plan and am astonished I managed to get any sort of academic employment. I view my academic career as a wholly unexpected but very welcome piece of good fortune. I ended up in Beirut entirely by chance. I wanted to get out of London and was lucky enough to be offered a position at AUB.

LN: In a recent talk in Berlin, you mention Bergson, Deleuze, and Whitehead and how those philosophers have been recently appropriated within contemporary scholarship (I believe at one point you make reference to Iain Hamilton Grant, whose philosophy I also take a great interest in). How do you appropriate Bergson or other like-philosophers (you also mentioned Bergson in Zagreb), and how does his thought play out within your work? Is there a philosophy of life or anti-life, vitalism or anti-vitalism, a beyond or "after" vitalism, working within your perspective?

RB: I’m very critical of Bergson and of vitalism more generally. Nevertheless, I think Bergson is an important philosopher who often asks the right questions, even if I think his answers are wrong.  I’m not interested in proposing a philosophy of life or anti-life, but in querying the inflation of “life” into a master-category in contemporary philosophy, not just by overt vitalists, but also by phenomenologists, critical theorists, and enactivists. I’m a great admirer of Iain and think our projects overlap in very interesting ways. I’m particularly interested in his work on “the physics of the Idea”. This ties in to the question of Plato’s relation to naturalism, which is of enormous importance for me. The philosopher in whom this connection is developed in the most ingenious and unexpected fashion is Wilfrid Sellars, which is why he has become such an indispensable resource for my work. Sellars is a Kantian philosopher who also adumbrated a process metaphysics, which is why his thought is so uniquely challenging, both for Kantian anti-metaphysicians and anti-Kantian metaphysicians. He takes up themes from Bergson’s metaphysics of duration but subjects it to a Kantian transformation that renders it compatible with empirical science.

LN: In your Berlin talk as well, there is a lot of ground covered with Plato.  It’s also known that you have an interest in philosophical naturalism.  How does Plato fit into your philosophical naturalism – if at all – and what might we learn from Plato according to your project?  (This seemed to be a major point of your talk.)

RB: Plato is a key touchstone for me. I think his separation of truth from doxa, and of the idea from the sensible, is the inaugural and indispensable gesture of all philosophizing. He’s also the founder of philosophy as dialectics, which I’m interested in re-affirming, having overcome my long aversion to its caricatured forms. Basically, I’m interested in reconciling Platonism with naturalism by reconciling the dialectics of the idea with the dynamism of the sensible. This is also a way of reconciling idealism with materialism, which I think is necessary. Again, Sellars is the key inspiration here.


LN:  Given your recent success with the much acclaimed Nihil Unbound, what are your reflections on that book now, especially as that book may relate to your research that will be appearing in the future?  You’ve mentioned that you are working on a number of things right now, what areas of research (or theses) should we expect to see?  Another book perhaps?  What should we expect from you in the future – in terms of articles, another book, or upcoming talks?  Please feel free to share any last words and end as you'd like.


RB: I regard the book as a botched job. It contends that nature is not the repository of purpose and that consciousness is not the fulcrum of thought. The cogency of these claims presupposes an account of thought and meaning that is neither Aristotelian—everything has meaning because everything exists for a reason—nor phenomenological—consciousness is the basis of thought and the ultimate source of meaning. The absence of any such account is the book’s principal weakness (it has many others, but this is perhaps the most serious). It wasn’t until after its completion that I realized Sellars’ account of thought and meaning offered precisely what I needed. To think is to connect and disconnect concepts according to proprieties of inference. Meanings are rule-governed functions supervening on the pattern-conforming behaviour of language-using animals. This distinction between semantic rules and physical regularities is dialectical, not metaphysical. To evoke it is to commit oneself to a qualified version of anthropocentrism, which I’m quite prepared to defend. It’s of a piece with the distinction between sapience and sentience, which is fundamental for Sellars.  I’ve been working my way through his writings since completing Nihil Unbound and my understanding of his thought has progressed considerably since my brief (and woefully inadequate) treatment of it there. His influence will feature prominently in the book I’m currently working on, tentatively entitled That Which Is Not. It will be about the reality of appearance, a topic which was not properly addressed in Nihil Unbound. The challenge of rationalism is to insist on the distinction between appearance and reality, or the sensible and the intelligible, while accounting for the reality of appearances, or the intelligibility of the sensible. This is a problem that goes back to Plato. It’s a question of understanding how every appearance has a kind of reality, but only insofar as it is split from within by what it does not reveal. This ties in to the issues of the intelligibility of becoming and the structure of time. These are themes that were touched upon but not properly worked through in Nihil Unbound. My other long-term project is a book about historical materialism and revisionary naturalism. But it’s premature to talk about it right now since it’s still at a very early stage.

LN: Thanks so much for taking time to do this interview, Ray.  It's been a pleasure and I am even more curious now where your future work may be headed. If you would ever like to inform philosophical readers online of what you're up to (especially talks - I missed your talk at Cornell because I just didn't hear about it online until it actually appeared on Cornell's website) then please feel free to email me and I can make an announcement informally on my website. In any case, hopefully we'll have the pleasure of meeting one day in person.  Best of luck to you and thanks again.

RB: Very good. Thanks for your kind offer, I'll certainly bear it in mind.