"To Speculate: On 'Realism'", or Heidegger, Schelling, and Meillassoux 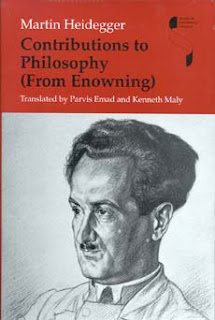 I found section 2.2 on Meillassoux and Heidegger of the below linked chapter particularly interesting as it engages both philosophers through a discussion of the Kantian transcendental. Something hinted at in the chapter which I think is incredibly important and have written about before myself (see HERE) is how Heidegger isn't as actually truly subject to some of the more damning claims made by Meillassoux in After Finitude as many might suppose. In fact, I have continued to maintain, as I do now, that the Heidegger of the '30s evidences that Daseyn isn't necessarily correlationally a "human" subject at all, understood as subject in one pole of the subject-object correlation. It would be a gross misstatement to characterize Daseyn as some kind of required correlational center-piece in the sense that it is a "human-opening" through whose poetic thinking Beyng might appear, and that only through Daseyn-as-human-opening might Beyng appear or be understood. Just as the distinction between Being and Beyng holds in Heidegger to present a thought held in two completely different lights, so does the distinction between Dasein and Daseyn differentiate Heidegger's realism of the '30s from his earlier anthropocentrically conceived Dasein in Being and Time. In the Contributions for example, Heidegger's realism is an idealism of a sort, true, but a realist-idealism that is non-correlational and transcendental.

It is for this reason that I actually prefer the Emad and Maly translation of the Contributions to the Rojcewicz and Vallega-Neu translation. Despite being more cryptic and at times enigmatic it presents Heidegger's project of the '30s in a way more true to its original influence of German idealism and its philosophical trajectory of transcendental realism: as being close to the project, aims, and understanding of Being as Beyng by the master himself, Friedrich Wilhelm Joseph von Schelling. The fact that Heidegger's Contributions to Philosophy works (as does his The Event and The History of Beyng) within a register of speculative idealism that is also a transcendental realism, means that the Heidegger of the '30s is often misunderstood as much as it is overlooked. The realist Heidegger of the '30s is certainly under-utilized in discussions concerning speculative philosophy, German idealism, and transcendental realism.

For the above reasons "To Speculate: On 'Realism'" (Chapter 2 of Dearth: Eco-Deconstruction after Speculative Realism, by Phil Lynes, through Fordham University Press) is definitely worth taking a look at. Here is its abstract and then the link.


This chapter turns to an eco-deconstruction of the Kantian questions of finitude, the imagination and reason [Vernunft], both theoretical/speculative and practical, as well as the principle of reason [Satz vom Grund] for which there must be something rather than nothing, as we continue illustrating a realist time-space of extinction from Derrida’s unpublished 1970s seminars on Blanchot and Heidegger. Key to our investigations will be the speculative materialism of Quentin Meillassoux, as well as all these thinkers’ engagements with Kant concerning the thing without us, the temporality of the gift or promise that can be neither known nor thought – but can perhaps be imagined, dreamt or attested – as a transcendental illusion, an antinomy or transgression of pure reason.