Land on Kant and Hegel, Husserl, phenomenology, and Schelling (quote of the day) 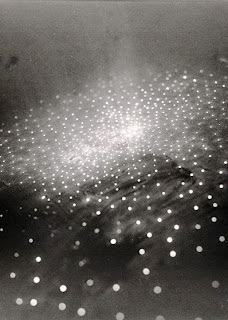 While reading Land's The Thirst for Annihilation the below stood out as particularly interesting. I decided to type out some excerpts for After Nature readers to enjoy as well. As I begin thinking about lines of research for this summer some of these ideas and directions certainly will come into play, so re-typing it has its research purpose as well. (Note: see also After Nature post "A humble attempt to introduce the philosophy of Nick Land...", HERE.)

“The importance of Hegel is not immediate [but] stems from the character of Hegelian thinking as redemption of Kantianism; its attempt to save transcendental philosophy from the lethal spasms welling up from within….Hegel's philosophy is the life-support machine of Kantianism, the medical apparatus responding to a crisis.”

“Hegel's reading of Kant is complex and multifaceted; but also of an unprecedented coherence. Its intelligibility is, in the end, coterminus with the possibility of a system of reason, or actual infinity. Hegel realizes that the Kantian conception of infinity, which abstractly opposes itself to finitude rather than subsuming it, indefinitely perpetuated a dangerous tension, insofar as it suspends the moment of resolution. This bad infinity – the endless task of perpetual growth (capital) – is incapable of ever diminishing the prospect of utter collapse. Kantian infinity is deprived of any possibility of intervening….Kantian infinity is given, whereas Hegel sets it to work.”

“To repeat, Kantianism is to perpetuate the exacerbative displacement of critique, to exceed it is to cross the line which divides representations from the real, and thus to depart both from philosophy and the world that has expelled it into its isolation. Critique is a matter of boundaries, or the delimitation of domains of application for concepts. The Kantian name for the items within the legitimate field of theoretical cognition is phenomena, whilst the extra-territorial items are called noumena. Because the noumena escapes the categories of the understanding Kant says “we can neither say that it is possible nor that it is impossible.” Noumena are what escapes the competence of theory...noumena are only understood as being such only in a negative sense.”

“The most coherent attempt to establish a connection between conception and outside is Hegel's, in particular his phenomenological solution to the delineation of experience. Hegel argues that the boundary of experience is produced by the inherently self-transcending character of reason, so that the discursive excess which is exhibited...is not confined by the difference which restricts or determines phenomenality, since it is itself auto-differentiation….This is not merely the collapse of Kant's thing-in-itself back into the phenomenal world, because Hegel does not think of spirit as a timeless (transcendentally pre-given) system of cognitive faculties in Kantian fashion, but as a historical auto-production in which the self is really – and not merely reflectively – determined by the logically orchestrated activity of thinking as and through time. Hegelian history is not formal but speculative, which means that the subject is developed and not merely expressed through the series of predicates by which 'it' is thought.”

“Since Hegel the word phenomenology has fallen even further into disrepute. Compared to the majestic system of Hegelian philosophy, the philosophy of Edmund Husserl – with which the word 'phenomenology' is now inextricably tangled – is a mere neo-Kantian eccentricity.”

“An altogether richer vein of thought [richer than Husserl – After Nature, ed.] is that initiated by Schelling, provoked by Hegel's famous remark concerning a 'night in which all cows are black.' Like Hegel, Schelling saw the weak spot of Kantianism to lie in the impossibility of a rigorous determination of the transcendental ground of knowing, since what is transcendental has to remain immanent to ts own disjunction. What differentiates these two philosophical modes is that where Hegel's Auhebung or assimilatory negation passes through the other, appropriating it as a mediating pause of absolute reason, Schelling's Indifferenz undercuts the articulated terms, exacerbating the critical gesture, since one of the transcendentally subverted terms is in each case the simulacrum of the transcendental. Hegelian thought is guided by the exigency of comprehension (which when pushed to its limit grounds itself), Schelling's by that of transcendental grounding (which at the limit comprehends all difference).”