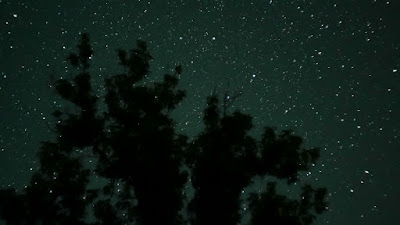 The ctenophore’s brain suggests that, if evolution began again, intelligence would re-emerge because nature repeats itself. See the article, "Aliens in our midst" HERE.
The discovery of independent life beyond Earth would have deep philosophical implications for us, and our ideas of morality. "The Ethics of ET" HERE. 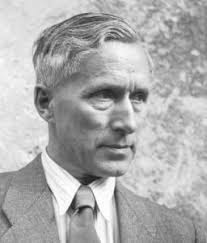 “Freedom, however, does not dwell in emptiness, but rather dwells in the disordered and the unseparated, in those areas which are organable but not to be part of the organization. Let us call them the wilderness; it is the space from which man not only can lead the struggle, but from which he can also hope to win. This is no longer a romantic wilderness, of course. It is the primal cause of its existence.”
- Ernst Junger, Across the Line (1951)
“They forged the new, terrible yoke for the masses. Technology supported them in a way that surpassed even the wildest dreams of the old tyrants. The old means returned with new names – torture, serfdom, slavery. Disappointment and despair spread, a deep disgust at all the phrases and twists of politics. This was the point at which the Spirit turned back to the cults, where the sects flourished and in small circles and elites they devoted themselves to the fine arts, tradition, and pleasures.”
- Ernst Junger, Heliopolis (1977)

I love it. As aptly put, and it was so off-handedly put so that shows you his absolute brilliance right there, - "The People's Democratic Antifascist Security State." You can't get more descriptively correct than that. Nail on the head, people. That's what we are living it. Social Totalitarian Democracy.

It's time to "flee to the forest." Read Ernst Junger's The Forest Passage (1951) , or his 1951 essay "Across the Line." Even Junger's Eumeswil (1977) is a conceptual road-map as to how to navigate this sinking ship; the corpse of Leviathan is about to beach. Get ready.

... Not only demonstrating obedience to the People's Democratic Antifascist Security State but ALSO knifing the patriarchy / family loyalty in the back in an exemplary act of pure fanaticism. 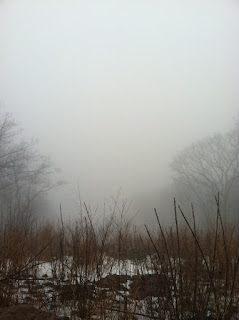 Schelling's attempt to explain creation in terms of nature's "ground" and "existence" is a seminal moment in his thinking. It is by no means surprising that he would turn to Plato's Timaeus to develop that distinction in a type of philosophy of organism or "organicism," which Plato himself had developed implicitly in the Republic and rather explicitly in the Timaeus. Schelling, modeling his own philosophy of organism upon this, makes the most concrete statement of his position in this commentary. 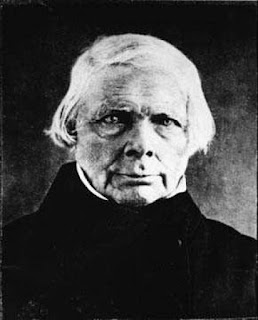 As an aside, for awhile now I've been considering how Schelling and Plato both inform each other's metaphysics in light of what I call an "ecological metaphysics," something extremely valuable in contemporary Continental environmental philosophy, whether through environmental aesthetics, environmental hermeneutics, or semiotic phenomenology - the key being the disclosure, experience of, and interpretation of natural signs and sign processes in the natural world, e.g. Jasperian "cyphers" in light of holistic and inter-related context.

Continental environmental philosophy hasn't had current meaningful developments since Erazim Kohak's Green Halo and The Embers and the Stars. While much has been done with Merleau-Ponty, or Merleau-Ponty and Schelling together - a task which has by now become rote and shopworn - I think the time is ripe for a fresh perspective, perhaps with the development of this "ecological metaphysics" directly using Plato and Schelling.

Link to Schelling's commentary on the Timaeus HERE.

The continuing relevance of Deleuze 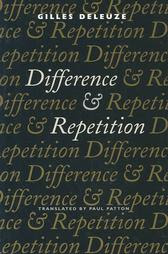 Great article about the continuing relevance of Deleuze by Alex Galloway called "Everything Flows" over at Social Text Online, HERE. A related article titled "Introduction: Control Societies" at the same website though different author can be found HERE.

For the Philosophy of Technology & Organic Being seminar we read Byung-Chul Han and Bernard Stiegler, both who engage Deleuze on the point of societies of control (beyond discipline) through technology.

Email ThisBlogThis!Share to TwitterShare to FacebookShare to Pinterest
Labels: Deleuze

"…every visible and invisible creature can be called a theophany, that is, a divine apparition. For…the more secretly it is understood, the closer it is seen to approach the divine brilliance. Hence the inaccessible brilliance of the celestial powers is often called by theology 'Darkness.'"
– John Scotus Eriugena, Periphyseon

Email ThisBlogThis!Share to TwitterShare to FacebookShare to Pinterest
Labels: metaphysics and theology, quote of the day 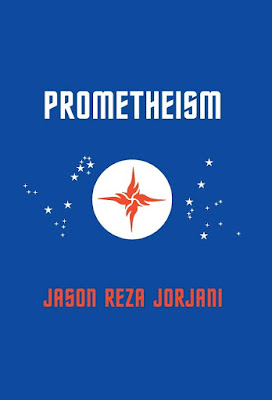 I added a few things to read for January term/winter break as we were caught up and had a few weeks to include original material that I thought I had to cut for the sake of time. As it turns out, we do have the time to include it, thus the updated syllabus.

The material now included comprises a small little section of its own which I call "Relational Being" (this in addition to the first part called "Organic Being" and the, now, third part, called "Technological Being"). It is more a less a transition from the tale end of part one's discussion of desire and need or libidinal drive in organisms and then Deleuze's notion of "desiring machines" to the idea of organisms-as-machines or cybernetics and the union of organism and machine via technical objects.

We begin Part Two, "Relational Being" with Simondon's On the Existence of Technical Objects and newishly translated essay "Technical Mentality." From there we read a few small pieces of Byung-Chul Han's In the Swarm and The Burnout Society to make the transition into part three, "Technological Being" where we go over how technological being affects organic being when (cybernetic, or otherwise) modal entanglement and unions occur as they have in the 21st-century.

Part Three, "Technological Being," closes with some of Bernard Stiegler's Nanjing Lectures and selections from Technics and Time vol. 1, Jason Reza Jorjani's concept of "Prometheism" in Chapter 1 of his book Prometheism, and finally Ernst Junger's Promethean call to heroically march forward into the cosmic technological unknown in his essay "At the Wall of Time" (1959) and The Worker (1932).

The link to the updated Syllabus is HERE. As a side note I plan to begin posting on my YouTube channel recordings of the seminars once January term is over (this way I'll have gone through at least half of the material before posting it). I'll probably discuss it as a long-form series on my weekly Sunday night YouTube live-stream on as well. 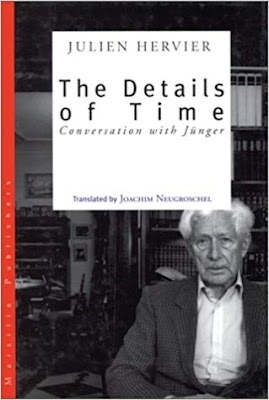 Countercultural community was more explicitly thematized in Jünger’s dystopian novel Eumeswil. The title names a petty state in a decadent, post-apocalyptic future, an “epigonic world of languishing empires and degenerate city-states” where history has ground to a halt. In Eumeswil, Jünger writes, “values keep growing more and more shallow,” while the “great ideas for which millions got themselves killed” are no longer thought worthy of sacrifice. The distinctions that once divided populations by race, creed, and class have also “largely vanished.” Eumeswil, we are told, is an “atomized society,” in which only “the gross pleasures” and “the demands of everyday life” are taken seriously. This philistinism is abetted by thinking’s reduction to “purely quantitative terms” and the “decay of language” into vulgarity and slang. Despite its futuristic setting, it gradually becomes clear that Eumeswil is in fact a thinly veiled portrait of what Jünger believed was his own nihilistic, post-historical present.
[...]
The creation of private or semi-private spaces proved appealing to many German writers and intellectuals after 1945 [...]counterspheres were likewise crucial to the search for interlocutors and influence. A good example is the network of relationships that grew up around the disgraced jurist Carl Schmitt. Institutionally ostracized after 1945, Schmitt was nonetheless widely consulted through informal channels—including invited lectures, countless epistolary exchanges, and long conversations at Schmitt’s home in Plettenberg. Counterspheres were also deemed necessary as a means of resistance to “Americanization” by those who, like Schmitt and Jünger, refused to submit to denazification or openly recant their earlier works. Media censorship in the occupation zones—what Schmitt damned as the “licensed public sphere”—fanned resentments about the imposition of liberalism and other supposedly foreign values. In response, Constantin Goschler observed, “radical conservatives developed an alternative to the liberal public sphere, primarily in the form of a retreat into the private sphere, where one could cultivate an arcanum amongst like-minded buddies. This practice contributed heavily to a sharp division between public and non-public or semi-public discourses that emerged in Germany shortly after the war and constituted an important element of West German political culture for some time after. 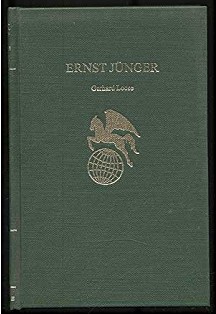 'We comes to terms with the fact that mankind has led the earth into a new age by intervening in nature, thereby threatening its own survival. The “apocalyptic mood,” according to Jünger, is “a sign that we have reached a stage where the fate of the earth as such is in doubt.”'
- Ernst Junger, Gerhard Loose 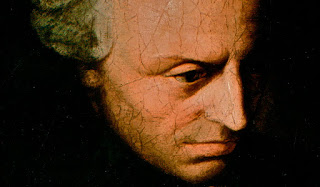 Thought-provoking article posted by Telos Press, "Kant, the Old Racist." These excerpts below in particular were interesting. Link below.

Political correctness is spreading to thought itself and deep into history. In this connection, the hatred for old white men is now concentrated on old wise men. This is surely the most extreme form of cultural revolution since Mao. Steadfast, the guardians of virtue replace thinking with intolerance and self-righteousness. The victim status renders with its pathos of indignation any argumentation superfluous.

As though the past were still unfinished, history is being rewritten. Children’s books are being expurgated or censored; a gender-sensitive Bible frees God of the stain of being a father; streets are being renamed, holidays corrected, and statues toppled.
The fact that it is now Kant, philosopher of the Enlightenment, who has fallen victim to the tribunalizers, should make it clear to everyone that the fate of occidental rationalism is at stake here. One can put Kant up “to debate,” without reading him. For reading Kant is very exacting—and this is something that even with the best of intentions can be avoided. After all, the tribunalization of the past has an important alleviating effect. A label is stuck to a great mind, and one no longer needs to deal with him. “Putting up for debate” replaces studying.