A humble attempt to introduce the philosophy of Nick Land... 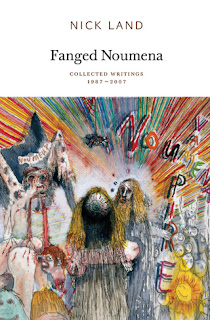 Craig H. at Southern Nights blog (formerly Social Ecologies blog) has posted a very good collection of posts regarding a number of varied but centrally related topics concerning the philosophy of Nick Land. I am not sure how to pin a post, however even for my own personal interest I am going to make my way through all of the below posts (I've read closely just a few of them). It will take you (and me) some time to read and digest; although I must say that, oh, probably for the past month or so I've been curiously hovering around Land's ever-entertaining Twitter account, and his own blog Outside In (linked below) has been a long-time friend in my Feedly blog subscription app.

In what follows there is perhaps a gushing over Land's philosophy as much as an introduction, yet, it cannot go unsaid that at least in my humble opinion, his work is more enticingly interesting than anything going on today in contemporary Continental philosophy. This is not to say I take it all as true. But I do take it as absolutely fascinating and compelling. There are some very interesting ideas at work.

Let me also say this: in the posts below you'll read much about the CCRU, Accelerationism, as well as Nick Land (my favorite), and lots of other "intense" or "at the fringe things." It's justified, as that is what philosophy at its best does. But be prepared, because it all turns out to be philosophy-on-the-edges, probing time and what is real through "untimely meditations" so-to-speak, revealing an unknown as unknown. The Real. Call it what you want. What Land uncovers is not for the faint-hearted.  Thus, pretty dark stuff.

Land is indeed a genius of our time, though he is also "ahead" of our time (whatever "time" might mean - you'll see when you read the posts). Everything Craig has covered here is absolutely fascinating (again, reiterate: whether much of it is "true" is another story). Nonetheless, if one wants an education in Land's outlook, read closely the below.

So, over the next week or so I shall work my way through Craig's posts as a guide (no pressure, Craig). So far, though, if through these posts you want to know what's coming in discovering what Land is all about, imagine his philosophy something like Nietzsche, Schopenhauer, Cioran, Freud, Deleuze, and Bataille  mixed in a hyperstitious synthetic steroid cocktail of accelerationism, cyberpunk culture, NrX, Dark Enlightenment, CCRU, and discussion about something called "time wars" and "Studio Reality." Dizzying, but fun - we'll be dancing at the asylum, and that's a good thing .

The Awl blog puts everything rather succinctly:


Philosophically, the nineties iteration of Land was one of the most significant modern descendants of the sceptical and nihilist tradition in Western philosophy. Like his heroes, Nietzsche and Bataille, he was unremittingly hostile to the liberal Enlightenment philosophy of Immanuel Kant, which he saw as a failed attempt at replacing God with sacralized reason following the collapse of religion as source of philosophical certainty. Once set free from this religious cage, however, thought proceeded to demolish reason as well as any other claims to truth; for Land, Enlightenment notions of rationality, free will, and selfhood were naïve efforts to save human consciousness (what he called the “Human Security System”) from being overwhelmed by the senseless and inhuman chaos of the universe — Lovecraft’s “shadow-haunted Outside” — whose truth was accessible only through the communions of art, death, ritual, and intoxication (of which Land enthusiastically partook).

Land’s greatest legacy was a philosophy now known as “Accelerationism,” a heady cocktail of nihilism, cybernetic Marxism, complexity theory, numerology, jungle music, and the dystopian sci-fi of William Gibson and Blade Runner. Land identified the critique that progressively dissolved all claims to truth as the philosophical correlate of a capitalist economic system locked in constant revolutionary expansion, moving upwards and outwards on a trajectory of technological and scientific intelligence-generation that would, at the limit, make the leap from its human biological hosts into the great beyond. For Land, as for Nietzsche, the death of God results ultimately in the desire to be destroyed, with capitalism the agent of this destruction.

To conclude, alongside Land one may wish to read his book on Bataille, something I am going to try to help me get at Land's core ideas - (and a decisive interpretation on my part of how exactly one ought to interpret and take away Bataille's conclusions determines what Land will look like for you; just like in Hegel, it depends what of Hegel one takes) - this seems to be in order for me, after I finish my re-read of Land's edited writings (1987-2007) within Fanged Noumena. Though, I may order his book on Bataille. We'll see.

(From a fellow blogger who understands how time consuming it is to produce such things, thanks to Craig for writing such lengthy detailed posts - some of which I'll put below.)