Iain Hamilton Grant: "Deleuze is a Fichtean, that is my thesis..." (quote of the day)

Encountered the below as I began sketching out the range, problems, concepts, and figures from whom I plan to draw (and those I plan to critique) in the book I am writing this summer. Title? Either Speculative Naturalism or Transcendental Naturalism. Not sure yet.

Title aside, in addressing Grant and Brassier (and others) Fichte, Kant, Hegel, Schelling, and Deleuze will be making their appearances.

In similar vein I discovered a revealing running commentary on Kant and Hegel written by Nick Land which I plan to use as well. Will post that as a quote of the day, hopefully soon enough. 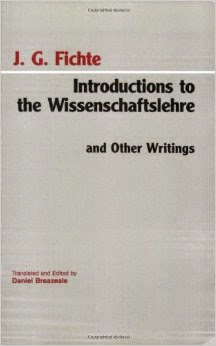 "The most profound attempt to articulate linguistic sovereignty over a non-linguistic cosmos is Fichte's. It is profound because in his quest to do so he eliminates a priori any question of a cosmos which is not fundamentally logically constituted, by which I mean constituted from the position of the constitutor – from the Ich that posits. This is not as it were an absolute Ich, this is just an Ich that posits….All that he is ultimately interested in is that constitutive position as subjectivity, but linguistically or logically, in order to articulate whatever cosmos can be articulated at the cost of the elimination or reduction, as far as possible, of the actual cosmos. I thought that this was ingenious actually, and I spent some time working through how Fichte does this, and its basically the Ich and the nicht Ich, these two are inseparable and are always in some sort of tension; but the tension can always be reduced to near zero by means of the Ich's fundamental colonization of the space of the nicht Ich. So, all that is required is that wherever I come across something that shocks me, I simply insist that it was mine all along. And that's essentially the linguistic paradigm. There is no difference between that and a metaphysics as it were that shuts its gates where language apparently has limits; although where language has limits is a bizarre question to ask insofar as presumably, as far as it is asked, it is linguistically constituted as a constitution of the cosmos.

Now, that same Fichtean moment, I think you find it in Deleuze. You find it expressly in Deleuze's relationship to Plato. There's an extraordinary series of passages in Difference and Repetition where he says the time to overcome Platonism has come, but the question of what Platonism is has elided us save only for a few caveats that Plato is not a Platonist – there were no Platonists after Plato. But the question is what is Deleuze doing with Plato? And we find this out in Logic of Sense where he situates Plato as the materialist wise enough to invert the order of the normative with respect to the ontological….So what Deleuze is, is a Fichtean. You can back this up I think by looking at the reception of German idealism in France. France has been dominated by Fichte, there is a constant influence of Fichte there. So Deleuze is a Fichtean, that is my thesis….

The real reason why I argue this is because in Difference and Repetition you'll find Deleuze saying the present inquiry must accommodate all the categories of nature and freedom. But why are there two sets of categories, why the split? Where are there a set of categories for nature and the other for freedom? And in what does Deleuze's materialism consist if he acknowledges this pre-categorial split as it were, between nature and freedom?…Here you have precisely the recipe for the categories of nature without the need for Fichte at all. [But] Deleuze celebrates the tradition of German idealism for their discussion of the auto-positing concept [of the categories]. So I don't think it's too much of a reach actually to see the dominance of the ontological as being the precursor to the dominance of the ontological over the normative."


"It is to the degree that he goes beyond the aporias of the subject and the object that Johanne Fichte, in his philosophy, presents the transcendental field as a life, no longer dependent on a Being or submitted to an Act – it is an absolute immediate consciousness whose very activity no longer refers to a being but is ceaselessly posited in a life…. A life is the immanence of immanence, Absolute immanence…."