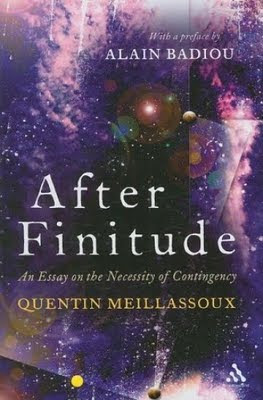 A very interesting thesis is, to what extent might rationality - and all that is included along with conceptual navigation and the implementation of that navigation, including inference-making and judgment - be extrahuman as much as it is human?  While such activity is found immanent within human consciousness there is a sense in which it is immediately other than human consciousness: already "outside" of it, already part of "the great outdoors."  In the below linked paper the author turns to  the semiotic thought of Charles Sanders Peirce and Jakob von Uexküll vis-a-vis Quentin Meillassoux in order to flesh out notions of radical alterity and perception which are, perhaps, always and already other-than-self.  This is to say that the radical alterity in question is already outside as much as it is inside.

The practical upshot of such a notion is that perhaps there is more of a continuity than supposed between human and nonhuman by way of (natural) semiotic expression and communication, with modes of reasoning and acts of natural semiotic articulation allotted more broadly to who, or more essentially what, is actually capable of such acts - this without necessarily claiming that such acts are of a strictly "mental" or immaterial nature (thus "subjectalism" and the reading upon the world explicitly human traits or features).  Here it is possible to see that rationality, encompassing semiotic expression and communication, is of course not a strictly human affair and may be more deeply embedded in the world than once supposed, part of perceptual universes other-than-the-human but equally capable of complex conceptual navigation, inference-making, and judgment.  The result is that while the conceptual is part of the world this is not to say that the world is at bottom conceptual.  In a very strange way, then, the very notion of what "consciousness" means, what "perception" means, and what "reasoning" means - changes to the benefit of de-leveling any anthropocentric privilege formerly granted to explicitly human forms of consciousness, perception, and reasoning. Following Hegel, the real is rational and the rational real. Nature does not just affectively express, it reasons. And humans are but a small part of that. 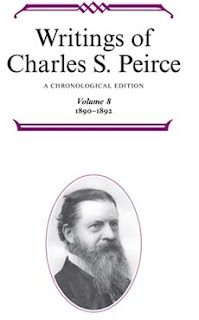 Finally, I should say that while there is certainly much, much overlap ontologically and cosmologically between C.S. Peirce and Meillassoux, most profoundly on the issue of the necessity of contingency, the virtual and the possible in the role of counter-factuality and logic of possible Worlds (an "immanence" of the World beyond), set-theory's use in the advancement of arguments purporting not only the necessity of chance but the statistical formation of "universal" "figures" generally accrued over the long-run through a kind of habit-formation of the universe, and a Hegelian eschatological hope for a future World of justice and community albeit a tempered hope due to the Schellingean motor of reality which being the only absolute seems to forever forestall such an eschatological completion, that semiotics would be another ground upon which these two philosophers seem to converge.  Even in seeing speculation an alternative to dogmatism and criticism, spurred on by acts of abduction or "retroduction" and the function of a "metaphysics-of-the-open," of speaking not of what is but rather only what can be, is enough to warrant any side-by-side comparative study of these two philosophers extremely productive and of immense fruitful benefit.

To that end this paper is a welcome, illuminating step.