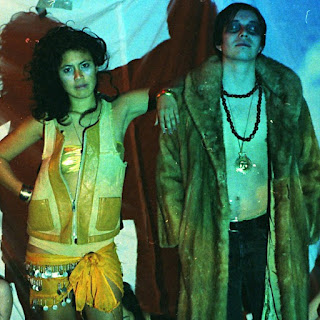 From the album review from Resonancity HERE.

Electronic music in Toronto is presently enjoying some serious love (see Trust, Austra, Azari & III etc.). Jumping into the party is Phèdre, a collaboration between April Aliermo and Daniel Lee of Polaris Prize-nominees Hooded Fang, and Airick Woodhead of Doldrums fame. Eschewing the surf rock feel of Hooded Fang’s critically acclaimed release, Tosta Mista, Phèdre comes off like an ode to electronic decadence. It’s a lush, sensual album, and you’re likely going to want to get your dance on soon after hearing it.

By way of a quick primer for those of us without access to Wikipedia (it’s not the 18th again, is it?), Phèdre is named for Phaedra, one of Greek mythology’s crazier, angst-y heroines. Phaedra’s story is pretty classic: She meets a guy, in this case Theseus, slayer of minotaurs, subject of the shitty film Immortals, and marries him. Unfortunately for her, she falls in love with her stepson, who would rather spend time with his horses than his lusty stepmom. So Phaedra does what anyone would do – she accuses her stepson of rape and then commits suicide to drive the point home.

What the myth of Phaedra has to do with the band Phèdre is pretty clear from the first track. The album is loaded with sensuality while simultaneously sounding schizophrenic and strange. Layers of effects and elements are piled on top of the band’s vocal tracks, which have a crisp, clear, and innocent sound to them. Phèdre’s first single, ‘In Decay’, is a perfect example of the band’s aesthetic.

‘In Decay’ combines lyrics revolving around a few brutal murders with a perfectly jangly pop melody. The overall feel of Phèdre is something akin to a disco party in an insane asylum. It’s a good thing.

The rest of the album borrows liberally from new-wave and dreamy pop tunes. The band claims their sound was at least partially inspired by the ’67 Lee Hazlewood and Nancy Sinatra tune “Some Velvet Morning”, another slightly off-putting (also in a good way) pop song about a mysterious woman named Phaedra.

Strange and beautiful though it is, there are plenty of tracks on the album that are simply fun to dance to. After all, we know that Hooded Fang and Woodhead can create great electronic music independently. This kind of collaboration simply cements the fact that Toronto’s electronic scene has some impressive artists at work.