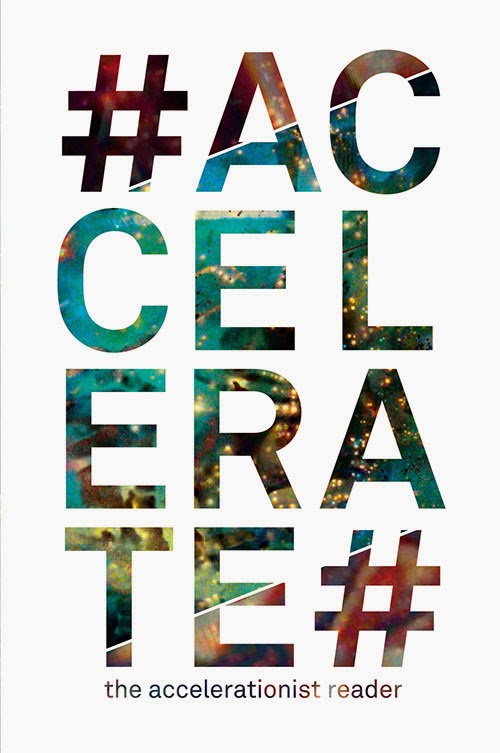 The Accelerationist Reader will be available April 14, 2014.  Books contents and description are copied below.

And of course we suffer, we the capitalized, but this does not mean that we do not enjoy, nor that what you think you can offer us as a remedy - for what? - does not disgust us, even more. We abhor therapeutics and its vaseline, we prefer to burst under the quantitative excesses that you judge the most stupid.
- Jean-François Lyotard, Libidinal Economy

We believe the most important division in today's left is between those that hold to a folk politics of localism, direct action, and relentless horizontalism, and those that outline what must become called an accelerationist politics at ease with a modernity of abstraction, complexity, globality, and technology.
- Alex Williams and Nick Srnicek, #Accelerate


Accelerationism is the name of a contemporary political heresy: the insistence that the only radical political response to capitalism is not to protest, disrupt, critique, or détourne it, but to accelerate and exacerbate its uprooting, alienating, decoding, abstractive tendencies.

The term was coined to designate a certain nihilistic alignment of theory with the excess and abandon of capitalist culture, and the associated performative aesthetic of texts that seek to become immanent to the very process of alienation. Developing at the dawn of contemporary neoliberal consensus, the uneasy status of this impulse, between subversion and acquiescence, between theoretical purchase and aesthetic enjoyment, constitutes the core problematic of accelerationism.

Since the 2013 publication of Williams's and Srnicek's #Accelerate: Manifesto for an Accelerationist Politics, the term has been adopted to name a set of new theoretical enterprises that aim to conceptualise non-capitalist futures outside of traditional marxist critiques and regressive, decelerative or restorative solutions.

#Accelerate presents a genealogy of accelerationism, tracking the impulse through 90s UK darkside cyberculture and the theory-fictions of Nick Land, Sadie Plant, Iain Grant, and anonymous units like CCRU and SWITCH, across the cultural underground of the 80s (rave, acid house, Terminator and Bladerunner) and back to its sources in delirious post-68 ferment, in texts whose searing nihilistic jouissance would later be disavowed by their authors and the marxist and academic establishment alike.
On either side of this largely unexplored central sequence, the book includes texts by Marx that call attention to his own 'Prometheanism' and key works from recent years document the recent extraordinary emergence of new accelerationisms steeled against the onslaughts of neoliberal capitalist realism, and retooled for the twenty-first century.

Contributing to the energetic contemporary debate around this disputed, problematic term, #ACCELERATE presents a historical conversation about futurality, technology, politics, enjoyment and Kapital. This is a legacy shot through with contradictions, yet urgently galvanized today by the poverty of 'reasonable' contemporary political alternatives.