reality as social process and onto-empathy 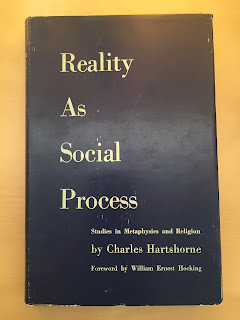 Hartshorne wrote in his Reality As Social Process that, "It may seem that the logical structure of reality should not be the only test of sociality. Let us define the social as the appeal of life for life, of experience for experience in another. Hence nothing can be social that is without experience. The minimum of experience, let us further agree, is feeling. Creatures are social because they feel, and feel in relation to each others' feelings. Can this be true of all things?"

I think what is most horrifying about object-oriented ontologies is the blank disregard for not only the social dimension of individuation, but the ethical dimension as well.  Pace my post below regarding selfishness, in a truly ecological ontology agencies are super-abundant as individuals only because of the common continuum of affect or feeling among them (what I have called "onto-empathy.")  Even the whole notion of regarding individuals as "objects" rather than "subjects" (for fear of reading human subjectivity or consciousness into material agents, there is no fruitful or meaningful answer that even could be given to the question, "Why objects?").  Reading nature as objects simply detracts from the sort of empathy that is required to understand and feel any other; in short, it pulls one into one's own "bubble" of selective awareness when in fact, because of ontological regard, it should be the other way around: one ought to be "pulled out of" one's self always and already: not withdrawal but rather semiotic super-expressive abundance.

Ecologically it is one thing to deconstruct the hierarchy assumed by human beings as pinnacle agents by bringing up to the same level of value-importance all other things (Buchler's notion of "ontological parity," that no one thing is more real nor less real than any other thing - although he develops this notion well beyond the simplistic "flat ontologies" that had been purported but never developed in the mid 2010's - and done so nearly twenty years beforehand).  It is another to assume the relevance of agencies within the world holds same.  And, it is another thing entirely to assume that ethical or value judgment need not be relevant when addressing these agencies - and, indeed, as ontological regard is a prime category, the recognition of various agents in the world itself ought to be equal if a truly capacious and yet environmentally just ontology ought to be achieved (or at least aimed for as a regulative ideal).

Considering how the object ontologists disregard and ignore those whose values differ philosophically (if they aren't attacked ad hominem, furthering the idea that object-oriented ontology lacks any notion of onto-empathy), this then becomes all the more rich.

But I've discussed this at length nearly six years ago in THIS post, "Do Animals Grieve?" The thought came to me as our John Dewey reading group was discussing sociality and the construction of the Good.

To close, and hopefully not to put too fine of a point on it, this made its way into my Speculative Realism book as well a few weeks ago while editing it, where I mention in a footnote how a former friend of mine responded to the question, "Why objects?" with "that is what I perceive."  Yet, he spoke nothing of any object's generation or relation.  Thus the major mistake of object-oriented ontology is its "shallow range" empiricism which misses the continuum of feeling, affectivity, and contemporaneity entirely. And there are dire consequences when missing how that affectivity fits into the realm of ethics - of which object-oriented ontologies have none that I know of. Perhaps for them it is a metaphysical-logical impossibility.