"Infinity, Cosmos, and Panentheism in Nicholas of Cusa" (Reflections on a post from Imago Futura blog + a great number of links) 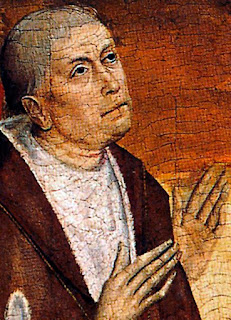 Austin Roberts / Imago Future blog has an interesting post up introducing Nicholas of Cusa for those who are unfamiliar with him, HERE. It's similar in nature to my "philosopher profile" posts that I used to do (I only ever covered Paul Weiss, Nicholas Rescher, and with the help of Bryan from Speculum Criticum blog, Justus Buchler.  In the future - if ever time I'd certainly like to do John William Miller, Wilfred Sellars, and perhaps Brand Blanshard). But Austin's post is a really good read.  So do check it out.

The main thought that I had from reading his post was just how important the concept of infinity is to panentheism. This plays out not only in Cusa, but in the likes of Plato, Schelling, Peirce, Hegel, Hartshorne, Whitehead, Emerson, James, and Coleridge, to name but only a few.  With respect to Scholastic (classical) metaphysical theology one may wish to consult John Scottus Eriugena (one of my favorite Medieval philosophers in addition to Duns Scotus) or in same vein but from the twentieth century and with a Heideggerean-Schellingean twist, the Jesuit philosophical-theologian Erich Przywara and his (finally translated and published) Analogia Entis: Metaphysics - Original Structure and Universal Rhythm.

Regarding panentheism, there really are two books essential for learning that term's meaning.  The first is Philosophers Speak of God edited by Reese and Hartshorne.  This book is pretty much the gold standard for understanding the logically possible varieties of pantheism and panentheism and provides a detailed history.  The second is Panentheism: The Other God of the Philosophers - From Plato to the Present by John W. Cooper.  This is abit less technical but still very good because it is for the generalist and can be informative as an introduction.

Some penultimate statements of the panentheistic viewpoint would of course be Whitehead's Process and Reality, Hartshorne's The Divine Relativity, Schelling's Ages of the World, or less known, Samuel Alexander's Space, Time, and Deity. Even Plato's Timaeus has panentheistic elements (see the book Plato's Cosmology for example) which essentially sets stage.

The term “panenetheism” literally means “all-in-God-ism,” or the Greek-English translation of the German term Allingottlehere, the doctrine that “all is in God.” Karl Krause introduced the term to update and describe the philosophies of Schleiermacher, Schelling, and Hegel.

Later, “panentheism” came into common usage in the twentieth-century and was popularized by Hartshorne to describe his own philosophy, but also that of Whitehead's. Process philosophers usually take panentheism to mean, as Michael Raposa has put it in describing Peirce's God (and also Schelling's):


"One who views the world as being included in but not exhaustive of the divine reality. Such a view neither undermines the doctrine of creation nor collapses the distinction between God and the universe."

The panentheistic viewpoint is one main pillar in my ecotheological view as to how all of cosmos can be found sacred, whether the smallest of seed or the most distant star.  It supports a deanthropocentric view of divine reality in that, if God is "everywhere and nowhere," then no one species or form of existence is center.  All is equally non-center given the nature of the infinite, yet center in axiological value both in depth and breadth. I do not see this as a "leveling" down of all things human but only a "bringing up" to the same level of value and importance whatever has achieved being - human and nonhuman alike.  From an ecotheological perspective this enables one to consider the reality of sacredness for plant and non-human animal as well.  Many years ago I hinted to this in my post HERE "Do Animals Grieve?" (from October 2011, which still seems to be a very popular post all of these years later, initially linked by Graham Harman). One might also see my more recent post "Animal Theology," HERE.

In considering infinity but also with respect to the logic of theism a few years ago I ran a reading group that we decided to call "Philosophical Perspectives on Infinity."  Two very helpful books for that were A.W. Moore's The Infinite and the more analytical Philosophical Perspectives on Infinity by Graham Oppy. I'd also recommend the fantastic text The Logic of Theism and THIS MP3 lecture (24MB) by Kevin Staley (Saint Anselm College) on unifying classical and neo-classical accounts of divinity, including perfection and infinity, which mentions Hartshorne in connection to Cusa.

If readers of my blog are interested to read After Nature posts with similar content to that of Austin's post on Cusa, please see the below which discuss infinity and panentheism in some measure or another:

"Metaphysics of the Infinite"

"The Logic of Theism"

"God and the Logic of Worlds"