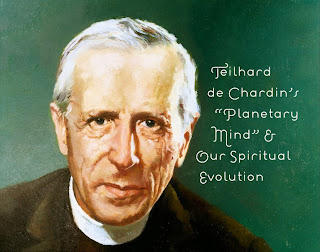 Aeon has up a great article on the panentheist process Catholic theologian Teilhard de Chardin. Highlights then link.  But first, one might also want to check out THIS podcast which features some of the scholars mentioned below discussing Teilhard.

Quickly I should mention that for a long time I was very much interested in how process philosophy and panentheism could be appropriated by the Catholic church.  As it turns out, there are many scholars - mostly Jesuits, of course - who do just that.  Names and books that come to mind are Fr. James Felt (see his Coming to Be, a book that knits together Whiteheadianism and NeoThomism), Fr. Frank Oppenheim (much of what he writes is process Catholic), Fr. Walter Stokes (alot), Fr. Joseph A. Bracken (again, pretty much everything), Fr. Lewis Ford (everything), Fr. Joseph Koterski (much), Fr. Norris Clarke (everything), Fr. Hosinski (Stubborn Fact and Creative Advance) but also Daniel Dombrowski (much), John Haught (everything). Or THIS is a useful link of Roman Catholic process theologians.

Finally, Kinast's Process Catholicism and Korsmeyer's God-Creature Revelation are pretty much definitive statements on any possible future for Catholic process theology.  I've read both and each are top notch.

Teilhard laid out the most ambitious synthesis of Christianity and evolution by a Catholic scholar up to that time. His view was truly cosmic, embedding humanity in a dynamic universe whose evolutionary direction from the very beginning of life on Earth was groping its way towards consciousness. In his view, the evolution of consciousness in humanity was but a first step toward the entire cosmos achieving its own universal consciousness, or what he termed an Omega Point.

After Charles Darwin published On the Origin of Species (1859), some bold theologians sought to reconcile those ideas with Christianity, arguing that, as long as Catholics retained the notion of humanity’s exalted status as a special creation of God, there was nothing wrong with accepting the notion of the world having been created through a gradual process of evolution, as Darwin had outlined. Their efforts were quickly muzzled, although the Church was careful not to repeat its highly publicised mistreatment of Galileo. Between the years 1878 and 1899, books on evolution and Christianity by Father Raffaello Caverni in Italy, Father Dalmace Leroy in France and Father John Zahm in the US were censured.

Teilhard incurred the particular displeasure of Rome because he suggested that the Bible’s account of Adam and Eve in the Garden of Eden, and their Fall from grace as the ultimate origin and explanation for evil in the world, needed to be reinterpreted. Once you adopted an evolutionary perspective, Teilhard argued, evil can be considered a natural feature of the world – a sort of inevitable secondary effect of the creation process itself.

For as long as he lived, Teilhard’s work was suppressed by the Congregation of the Index, the Vatican office that collaborated with the Holy Office (formerly known as the Inquisition) in monitoring books. After he died, his friends and students began publishing his work – but the Church’s position on evolution remained grudging and reserved.

Ilia Delio, a Franciscan nun and director of Catholic Studies at Georgetown University, suggests that the notion of an immortal soul, in its classical formulation at least, is difficult to reconcile with evolutionary theory. ‘Teilhard de Chardin described evolution as a “biological ascent” from matter to spirit, a movement toward more complex life forms,’ she writes in The Emergent Christ (2011). But from the beginning, Teilhard insisted that spirit is present, even in lifeless matter. There’s no absolute separation between the two.

With doctorates in pharmacology and historical theology, Delio has written several books on the interface between science and religion, most recently editing the collection From Teilhard to Omega: Co‑creating an Unfinished Universe (2014). In her view, theologians need to forge a deeper synthesis between the science and the faith, but almost all of them tacitly accept the old cosmos of the medieval church, the old view of spirit and matter as completely distinct.

‘When I ask theologians,’ she told me, ‘many of them say to me: “Oh… I don’t have time to read on science. I’m not a trained scientist, I would have to take a sabbatical and read up.”’ Few want to venture outside of their comfort zone. An exception is one of her colleagues at Georgetown: the theologist John Haught, author of Deeper Than Darwin (2003), and Making Sense of Evolution (2010).

[John] Haught sees himself as picking up where Teilhard left off. In his view, the problem of the immortal soul and the physical body being distinct entities is a holdover from old theology, which tends to divide reality between the eternity of Heaven and the time-bound vicissitudes of life on Earth. Such a view, Haught told me, is almost destined to see the human being as a lonely exile.

It’s a beautiful story,’ he admitted. ‘The problem is it leaves out the dramatic history of the development of humans from the Big Bang up until today.’ And that story is not over, he said. Not by a long shot. If Catholic theologians would take seriously the fact that the Universe is a drama still unfolding, and that we are a key part of the drama, they could rekindle people’s sense of hope for the future.

How are such facts to be incorporated into the faith? How are they to be treated? A new papal encyclical? Pope Francis has already got conservatives worried about his upcoming encyclical on the environment. Is he the pope to finally write a new Letter on Darwin and the Church? Would the Vatican officially mothball its vague and embarrassing disclaimer on Teilhard’s work? Would it consider whether the French Jesuit is a candidate for sainthood?

Link to the full article HERE.