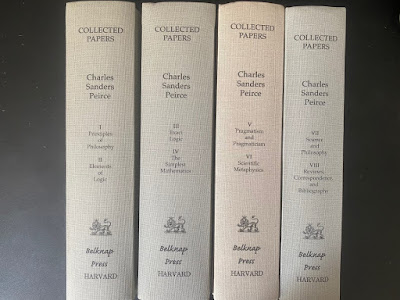 C.S. Peirce is usually read from the two volume The Essential Peirce and usually less so from the eight volume The Writings of Charles Sanders Peirce: A Chronological Edition (of which an eight of a projected ten volumes have been published), both published by Indiana University Press. However, as with anything, there is a gold standard. The four volume (printed as two books in each volume) Collected Papers of Charles Sanders Peirce is that gold standard.

Edited by mainly by Charles Hartshorne and Paul Weiss who were graduate students at Harvard at the time, it is the manner in which the texts are assembled that renders them both unique and powerful as a presentation of Peirce's ideas. I've always wanted this set, using the electronic version on CD but finding it difficult to navigate and actually read as I would a book.

Being asked to complete a prominently featured essay on Peirce (which I've just completed for publication) and twelve years after the writing of my dissertation on Peirce (and Martin Heidegger and F.W.J. Schelling, being a Schellingean then and now I live by the rule of thirds), I finally treated myself to this glorious collection.

Just something to cherish, reading the ideas of America's most brilliant philosopher, without whom I wouldn't have found my current home in Naturphilosophie. That home includes (for me, at least) of course C.S. Peirce, but also Schelling, Plato, Hegel, Fichte, Deleuze, Merleau-Ponty, as well as Alfred North Whitehead, Charles Hartshorne - and the lesser known philosophers of Justus Buchler, Paul Weiss, William Ernest Hocking, and John William Miller.

I'll be revisited the Schelling-Peirce-Plato axis in more research to come, focusing on recognizing the rich insights of this triad available for contributing to environmental philosophy. This with an especial eye toward attaining an ideal form of ecological justice which would be inclusive of non-human animals and other sentient forms of life.