Plato's influence upon Schopenhauer's aesthetics: On the Idea and Nature

Aesthetics Today has a great post up engaging Plato's influence upon Schopenhauer's aesthetics, specifically the role Platonic Ideas play in alleviating suffering of the Will. He writes,


There is something other than what we normally think of as Platonic Ideas as play here. First, we have the notion of "sides of an Idea which rarely appear." Second, we value individualities expressing themselves and their peculiar characteristics, through an "unfolding." Since aesthetic perception of Ideas is perceptual it is a matter of seeing the inward significance...of individual things.

This points to how the Idea in Schopenhauer functions much like the Kantian Ideas, not necessarily as literal Platonic Forms in an ethereal other-world, but as fully natural, functional guides and lures to action. The author of the post remarks this functionality reminds him of Nietzsche (Nietzsche's pragmatic appropriation of the Idea-as-expression-of-Will) and how the expression of individuals proceeds along the lines "as-if" its metaphysical aesthetic were "true" or "real" as it would be in and of itself. In other words, it is not necessarily the "reality status" of the Ideas within the purpose of aesthetics which is important for the organism, but the function of the Ideas and what they enable the organism to achieve. 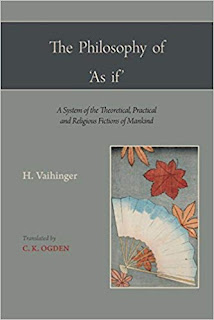 I recently picked up Vaihinger's The Philosophy of 'As If' with the above in mind. For awhile now I've been working through Kant's moral, social, and political philosophy sideline to a more general study of aesthetics (German romanticism and idealism) and naturalism. I've learned to distinguish between a kind of - what I call - "naturism" and the more typical philosophical naturalism, the former being metaphysically pragmatic and fulfilling a social-political community function that more or less elevates the category of "nature" to that of religion. Johann Gottfried Herder's Aesthetics is a representative of this as is, remarkably given his atheism, Schophenhauer. In the case of Schopenhauer it is the effort to temporarily alleviate the Will which paradoxically allows us to affirm what is immanent within a transcendental register. Taking the aesthetic to be of a transcendental register itself is a move made by all of Plato, Kant, and Schopenhauer. Plato and Kant have much, much more in common I think than many suppose, but there are certainly engagements with the two in the thinking of the German romantics and idealists.

Link to the whole post can be found HERE.