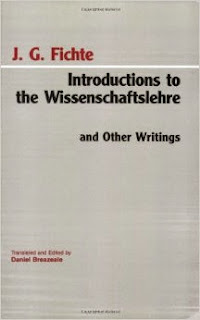 It never took much for object-oriented ontology to be revealed as the house-of-cards philosophy that it is, if only because it rests primarily on allure and slippery rhetoric rather than any real solid or rigorous argument (its authors have even admitted that one should save rigor "for the dead.")

Still, if for some amusement you want to see object-oriented ontology easily crack under pressure, watch Fichte blow over the house of cards in Book Two ("Knowledge") of the Vocation of Man. It is there he addresses a familiar question that I once posed to Tom S., one of the last few object-ontologists remaining today, namely the question of, "Why objects?" And to this Tom S. answered, "Well, that's what I *perceive*."

Boy does Fichte ever have fun with that answer! Read the second book of the Vocation of Man. It doesn't disappoint.

I'll have to dig it up sometime, but I recall Iain Grant dismantling object-oriented ontologies for similar reasons to Fichte, and he also brings in Deleuze to finish the job.

Just a thought as I've been working through Kant and Hegel, Ficthe and Schelling as of late.